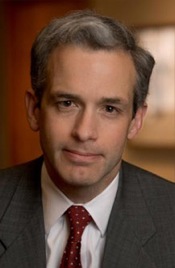 Former federal prosecutor John F. Walsh is among seven of President Barack Obama’s nominees for the job of U.S. attorney. If confirmed, the 48-year-old law-firm partner’s turf would be Colorado.

Obama’s initial choice, Stephanie Villafuerte, withdrew her name from consideration in December following a political controversy over her role in the 2006 gubernatorial campaign of Bill Ritter (via the Denver Business Journal). Both of Colorado’s U.S. senators—Democrats Mark Udall and Michael Bennet—are supportive of the new nomination.

“He’s a Colorado native who knows the Centennial State forward and backward,” Udall says, adding that he hopes for a swift confirmation.

Walsh is a partner in the Hill & Robbins law firm and a former federal prosecutor in California. He is also a finalist for an open seat on Colorado’s federal trial bench, according to Law Week Colorado. If sworn in, Walsh would replace David Gaouette, who has assumed the position since January 2009 on a temporary basis.