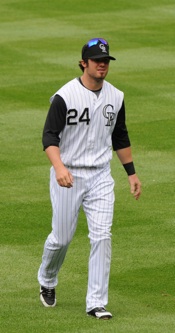 Hopefully you didn’t ditch work yesterday to take in the early-afternoon game at Coors Field, where the Colorado Rockies missed out on sweeping the New York Mets in an ugly 5-0 loss. Purple Row is paying attention, writing that “the Rockies defense continued a 2010 theme of humiliating themselves in public.” It sounds harsh, but it’s true. Third baseman Ian Stewart (right) botched a run down in the third inning that allowed Mets pitcher Mike Pelfrey to score, and Rockies catcher Miguel Olivo let a wild pitch get past him for another run later in the game. The Rockies are now 5-4 and two games back in the National League West, behind the somewhat surprising San Francisco Giants (standings at MLB.com). Thankfully, there are 153 games left in the season. Still, Inside the Rockies points out that yesterday saw the first Rockies shut-out at Coors Field since September 2008, when they lost 2-0 to the Houston Astros. Manager Jim Tracy says the team failed to execute all around yesterday. “It’s very difficult to try to sit here and explain to you guys how I think we could have won” (via The Denver Post). Perhaps the Rockies could learn a thing or two from Eaton High School’s baseball team. The Denver Post reports that the rural Colorado team, a two-time defending state 3-A champion, won its 46th-straight game, setting a state record. Coach Jim Danley logged his 675th career victory in the win.