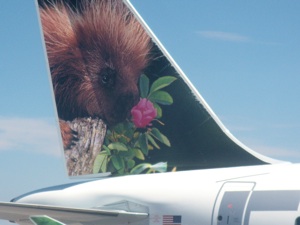 United Airlines flight attendants are angry. They picketed around the world yesterday, including at Denver International Airport, claiming that they’re working harder these days for less money than before. Moreover, they allege United is late on delivering them a labor contract, writes 9News. As that dispute unfolds, another issue is wending through the airline industry at Frontier, where it is unclear whether Frontier, recently purchased by Republic Airways, will continue to exist as the brand we all know—and likely recognize most for its talking-animal-filled commercials. Now, concerns abound that the animals featured on the tails of the planes—from the bear to the fox to the dolphin—could disappear, reports USA Today. Expect to hear the airline’s “plans to announce its unified brand” on Tuesday, April 13. The Denver Post recently pointed out that “speculation has swirled for months about the name for the combined operation. Indianapolis-based Republic Airways has worked to integrate the two airlines since buying them last year, saying it planned to ‘harmonize’ brands.”