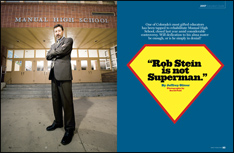 Rob Stein, the former Graland Country Day School headmaster who was hired to turn around struggling Manual High School, will leave his post next school year. Stein, 50, who was hired in 2007, doesn’t have another job lined up, reports The Denver Post, which notes Stein’s progress in improving the school, but also that “student proficiency remains low.” In a separate take on the departure, EdNewsColorado writes that student proficiency rates on state exams have more than doubled at Manual under Stein, who explains his departure: “I’ve had 28 straight years by the academic calendar doing lunch duty, running faculty meetings…the last 14 years as a school principal. I admit there’s a certain amount of fatigue that comes with it, but it’s a fatigue that I think I’ve earned after three decades, not a burnout. This is really just more of my recognition that I need a change.” Shortly after Stein was hired, Jeffrey Oliver profiled him for 5280, noting, “While many agree that if anyone can help Manual, it’s Rob Stein, many of them also say the school can’t be helped.”