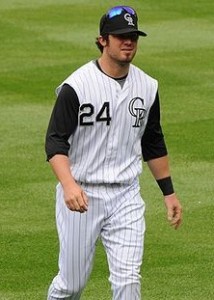 If you managed to stay awake for the entire Colorado Rockies game last night in San Diego, you were treated to an up-and-down game that may have revealed a winning formula for the future. The Rockies managed to beat the Padres 6-5 in 12 innings on a 12th-inning solo home run from Ian Stewart, who had been mired in a 2-18 hitting slump (game recap via Purple Row). Stewart’s bomb got the win, but things could have easily gone the other way.

The Padres smacked Rockies pitcher Aaron Cook around for five runs in five innings, continuing his trend of sub-standard play. Bullpen pitcher Franklin Morales, who has been filling in as the team’s closer, also had issues, walking the only two batters he faced in the 10th inning and nearly blowing another save (via The Denver Post). Manager Jim Tracy pulled Morales and inserted 2007 closer Manuel Corpas, who managed to pitch two innings of scoreless baseball and likely earned the closing job until Huston Street comes back.

MLB.com reports that Street is making good progress with a spring training shoulder injury. He is going to pitch today in an extended spring training game in Arizona and could make his way to the Rockies’ minor league team if that start goes well. Lord knows, the Rockies need him back, which would give Tracy more options in the middle-relief and late-game pitching carousel.

None of the Rockies’ pitchers are as good as Ubaldo Jimenez, though, who leads the league in wins (six), and is an early front-runner for the Cy Young Award. The Denver Post exposes Jimenez’s secret to steady pitching this year: his mother. He and his mother, Ramona Garcia de Jimenez, share a LoDo loft during baseball season, and she cooks Dominican food and takes care of him—like many mothers would. “I think it helps my pitching,” Jimenez tells the Post. “It gives me energy, and it makes me happy to eat my mom’s food.”