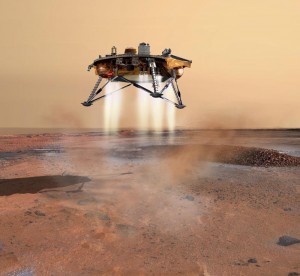 New images from NASA confirm that the Phoenix lander on Mars didn’t survive the harsh, freezing winter. Sent to study the red planet’s “high Arctic,” the lander fell silent about two years ago. Now, photographic evidence from an orbiter confirms that the lander was apparently destroyed by ice, according to the BBC. “Before and after images are dramatically different,” says Michael Mellon of the University of Colorado in Boulder, a science team-member for both Phoenix and the HiRISE camera on the Mars Reconnaissance Orbiter, which acquired the new data. “The lander looks smaller, and only a portion of the difference can be explained by accumulation of dust on the lander, which makes its surfaces less distinguishable from surrounding ground.” The announcement marks the end of the Phoenix, built by Littleton-based Lockheed Martin Space Systems, notes the Denver Business Journal. Phoenix became buried in frozen carbon dioxide as the Martian winter arrived in late 2008; darkness left the solar-powered lander without energy. When sunlight returned in January, some scientists had held onto hope that it would come back to life.