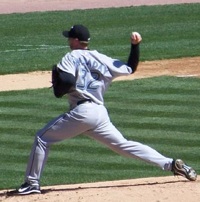 Former Arvada West baseball star Roy Halladay, now a pitcher with the Philadelphia Phillies and one of the best hurlers in the major leagues, made his first start in Denver as a pro yesterday, but the Rockies and Mother Nature spoiled it for him. The Rockies shelled Halladay for 10 hits—tying the most he’s given up this year, according to The Denver Post—and scored three runs before Phillies manager Charlie Manuel yanked him from the game.

The game was tied at that point, and stayed that way until the bottom of the 10th inning. After an amazing double play ended a Phillies charge in the top of the 10th, catcher Miguel Olivo stepped to the plate and crushed the first pitch he saw deep into the left field seats.

The Post points out that Olivo is a monster at Coors Field; while he’s hitting a paltry .122 on the road, he’s feeling it at Coors Field, hitting .419, including yesterday’s 5-for-5 performance.

Manager Jim Tracy also marked a season-first yesterday, getting ejected after arguing a close play in the ninth inning.

The cold, wet weather prevented the second game of the doubleheader, and maybe it’s a good thing the Phillies are leaving town. The Rockies are accusing the Phillies of stealing signs, even using binoculars during Monday’s game, and Major League Baseball agrees enough to have issued the Phillies a warning, according to MLB.com. There have been rumors of the Phillies stealing signs before, but don’t mention that to the Phillies’ blustery manager.

“Keep crying,” Manuel says to MLB.com. “I’m sure if they can steal signs, they’ll steal them. And believe we will, too, if we can get them. Yeah, we will. Legally. If you’re dumb enough to let us get them, then that’s your fault. That’s been in the game for a long time.”