Colorado Rockies fans can be forgiven if they were getting a bit tired of the team’s latest road trip, which began with four losses in five games to struggling clubs, including the Chicago Cubs, the lowly Houston Astros, and the perennial-doormat Kansas City Royals. But the Rockies found a way to take the last two from Kansas City, capping off the trip with Sunday’s 11-7 offensive explosion.

According to Purple Row, the Rockies are averaging less than four runs per game in May, something that hasn’t worked out very well for Colorado—unless the untouchable Ubaldo Jimenez is pitching. 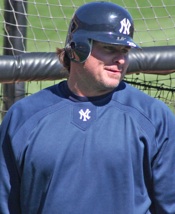 On Sunday, the Rockies’ Jason Giambi led the offensive outpouring with a three-run home run, and MLB.com notes that Troy Tulowitzki added a solo homer, his third in four games. The Denver Post recognizes Ian Stewart, Dexter Fowler, and Clint Barmes for chipping in big hits, too. The Rockies’ newfound run production came against the Royals’ Zack Greinke, one of the league’s best pitchers, but Colorado’s pitching staff still gave up a season-high 18 hits and almost allowed a nine-run lead to evaporate. Rockies starter Aaron Cook pitched four scoreless innings before a very rough fifth, which he did not survive to earn his second win.

And despite some players’ bats waking up, The Denver Post’s Mark Kiszla says the Rockies should bench first baseman Todd Helton, one of the best players in team history. He’s driven in a paltry nine runs all season and isn’t giving the team the production befitting a $16 million annual salary.