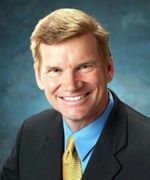 The last time we checked in on Ted Haggard, the disgraced pastor and exiled founder of Colorado Springs’ New Life megachurch, he had quietly created a church dubbed St. James. Yesterday, he tweeted a curious message on his Twitter account, “Gayle and I are taking the next step,” he wrote, providing a link to a “media alert.” The alert stated that a “repentant Ted Haggard will face the press and media with a surprise, groundbreaking announcement about his future” on June 2 from his Colorado Springs home. The alert notes that before his resignation after allegations of having sex with a male prostitute and using drugs in 2006, Haggard led 30 million Christian conservatives at New Life and as leader of the National Association of Evangelicals. Haggard has left no hint in his materials what his announcement will be.