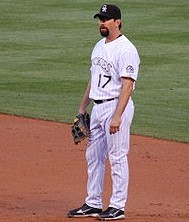 The Colorado Rockies’ Todd Helton is arguably the team’s best player ever and is among the best active hitters in Major League Baseball. This year, he’s hitting a respectable .284 with a .382 on-base percentage, but he only has six runs batted in and has zero home runs.

That’s not normal for Helton, and he admits to the Denver Post that there’s a “glitch” in his swing. Helton hasn’t hit a home run in 88 at bats, 10 shy of his longest home run drought—98 at bats in 1998. He’s also lacking extra-base hits: He has just four, while the Rockies pitching staff has a combined six.

The slump brings up memories of 2008, when a back injury that wasn’t publicized was killing Helton’s power at the plate. He denies that his back is flaring up again. “I have a lot of issues going on in my head, but (my back isn’t) one of them,” Helton tells the Post. “I’m OK. The back has nothing to do with it.”

The Post tries to explain the problem in the least technical way possible, saying that the way his foot lifts up when he faces right-handed pitchers causes him to hit the ball deeper in the strike zone than he’d like, cutting his power down.

Rockies hitting coach Don Baylor says Helton will be fine, and manager Jim Tracy laughs when asked about what’s going on with Helton.

It’d be nice, though, if he works it out soon, as the Rockies are a .500 team (14-14) and sit in third place in the National League West (full standings via MLB.com). They have a decent chance to improve that record tonight, when they start a three-game set against the L.A. Dodgers, a team that’s off to a worse start than the Rockies.

Yet, CBS Sports says that despite the fact that the Dodgers trailing the Rockies in the standings, the teams are relatively evenly matched and the three-game series could go either way.