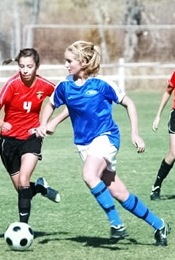 Lindsey Horan, a devout young soccer player, wants to be the best. That passion, writes The Denver Post, has made the 16-year-old Golden High School student one of the nation’s most talented midfielders in the class of 2012, landing her on the recruiting shortlist of many top college soccer teams.

She also plays on the national U-17 team, a role that has taken her across the world for tournaments.

Horan is on track to achieve her goal of playing professionally, but the decisions she’s made in order to pursue that dream have put off some of her classmates, and even some of her current teammates.

In 2009, Horan, who has played with the Littleton-based club-soccer powerhouse Colorado Rush for several years, bypassed Golden High in order to play with Rush’s male teams and push herself even harder. The decision led to derision from her classmates, who say she could have made her school team a lot better, helping them chase a state championship.

Horan also takes heat from her male teammates, who make “rude comments [or] purposely foul you,” she says. “But I kind of take that as a compliment now.”

Rush president and CEO Tim Schulz calls Horan one of the best players he’s seen in years—male or female. “[She’s] one of the best to come out of the club in, oh, boy, in the past 10 years,” Schulz says, comparing Horan to one of Colorado’s most renowned soccer athletes of the past decade.