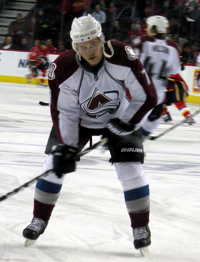 Talk of ice on 90-degree days in Colorado generally has more to do with the shaved variety than hockey, unless you work for the Colorado Avalanche, which currently is focused on putting the best team on the ice this fall.

To that end, the Avs have traded one-time promising prospect T.J. Hensick to the St. Louis Blues for Julian Talbot (via The Denver Post). The 24-year-old Talbot played for the Blues’ best minor-league team last year, scoring 17 goals in 76 games.

Hensick (pictured) was once one of Colorado’s bright, hungry young players, but he was demoted to the Avs’ minor-league team early last year and was never called back up to the pros. Since coming to the Avs from college in 2007, the most points he’s ever put up at the pro level were 21 in 2008-09, according to NHL.com.

The move shouldn’t come as any surprise to Avalanche followers, writes Mile High Hockey, which suggests that the team give up a much more established player: Scott Hannan, who will cost the Avs $4.5 million this year. The blog thinks the San Jose Sharks—one of the best teams in the league last season before they flamed out in the playoffs—should give the Avs a young prospect for the aging, expensive Hannan.

Either that, or the Sharks should offer some draft picks for him, considering the Avs have a bevy of young defenseman looking for a chance to prove themselves with the team. San Jose, which may need a veteran defenseman, would be a natural destination for Hannan, a former Shark. Such deals would also fit with the Avs’ model of building a young, inexpensive team.