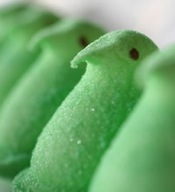 Last year, Carol Burdick was evicted from her Boulder County apartment, left to accuse AIMCO, the management company that holds her lease, of hating Peeps candy and other Easter decorations that adorned her door long after the holiday ended.

The matter is now in court, as the company argues that Burdick was evicted for a more routine reason: failure to pay rent. The company wants $2,300 from Burdick, as well as attorney’s fees that could cost her tens of thousands of dollars, according to Boulder’s Daily Camera.

But Burdick isn’t settling. She has filed a counter-suit, claiming Denver-based AIMCO breached its contract with her.

“She got manhandled here, and you need to straighten it out,” says Burdick’s attorney, John Pineau (via 9News).

Pineau has called in some big guns for the case, including Andrew Novick, a rocker with Denver’s iconic Warlock Pinchers band (which has a reunion set for August). Turns out Novick is a “Peeps expert” witness. Watch the 9News report.