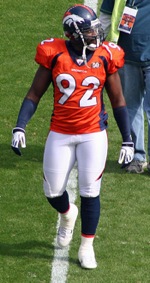 It’s widely believed that because Elvis Dumervil has signed a one-year, $3.16 million contract with the Denver Broncos, his involvement with the team is a done deal.

But that’s not the case. The Broncos merely extended the time period they have to negotiate with last year’s NFL sack leader, and a very real possibility remains that Dumervil will leave the team.

The Denver Post reports that Dumervil didn’t have much choice in signing yesterday’s deal. If he didn’t, he’d make just $630,000 this year, roughly 10 percent more than he made last season. That’s a lot of money for most of us, but not for a guy who’s in line to make roughly $40 million.

While the Broncos continue to negotiate a new contract with Dumervil’s agent, questions are beginning to arise. “Why won’t the Broncos reward Elvis Dumervil?” asks Fox 31.

To his credit, Dumervil is taking the high road.

“Football has a business side to it, and to me there’s a fun side, which is playing football,” he tells CBS4. “That’s the side I love. As far as the business side, it is what it is. There’s nothing I could really do about it.”

Meanwhile, Kyle Orton, the team’s starting quarterback, is in a similar situation. He, too, was in line for a multi-year contract worth many millions annually, but because of the NFL’s collective-bargaining agreement with the players, he became a restricted free agent.

The distinction allowed the Broncos to low-ball Orton, and the team will pay him just $2.5 million this year, making him one of the lowest-paid established starting quarterbacks in the NFL, according to The Denver Post (registration required).