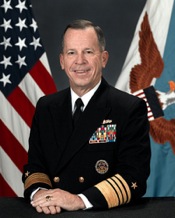 By now, most everyone knows that President Barack Obama fired General Stanley McChrystal from his job as top commander in Afghanistan because of the combat boot McChrystal stuck in his mouth—repeatedly—during interviews with Rolling Stone. To Admiral Michael Mullen, the chairman of the Joint Chiefs of Staff, McChrystal’s firing seems fair. Mullen (pictured) told an audience at a national security forum hosted by the Aspen Institute that McChrystal disparaged civilian leaders, showing “poor judgment” in executing the orders of the president/commander-in-chief (via The Aspen Times). Mullen also says he supports the appointment of General David Petraeus, the former commander in Iraq, to take over for McChrystal in Afghanistan. Britain’s Independent, meanwhile, shows the anatomy of the Rolling Stone story, including the methods of Michael Hastings, the freelance journalist who gained access to McChrystal for a month. Perhaps McChrystal’s handlers mistakenly regarded RS as a fluffy music magazine. For more than 40 years it has also served as a forum for “serious, agenda-setting journalism in the lofty fields of politics and popular culture,” the Independent points out.