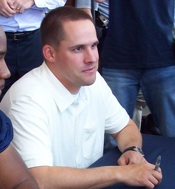 An NFL.com columnist is also down on the Broncos, labeling the 2010 squad a “Tier 4” team, only a step above flailing NFL franchises, such as the Detroit Lions and the St. Louis Rams.

But not everyone is worried: The Denver Post’s Woody Paige writes that McDaniels is more likable than he comes off through the media, and that he sees McDaniels succeeding in Denver over the long term. Mile High Report is also optimistic, projecting a breakout sophomore season for running back Knowshon Moreno and anticipating more aggressive play calling and a solid draft class. The NFL Network profiles McDaniels and his first-year woes, showing a coach who knows he has a lot to deal with in the upcoming season.

Meanwhile, the Broncos could get a boost soon, as former Philadelphia Eagles running back Brian Westbrook is expected to decide which team he’ll play for next, according to the NFL Network’s Jason LaCanfora. Westbrook is reportedly considering the Broncos, the Rams, or the Washington Redskins.