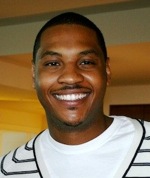 In most careers, offering a raise almost guarantees to keep talent in place. But that’s not always the case in the world of professional sports, as evidenced by recent news surrounding Carmelo Anthony and the Denver Nuggets.

Yahoo! Sports reports that the Nuggets have offered Melo a three-year, $65 million contract extension, hoping to avoid a potentially bank-breaking free agency battle with other teams at the end of the 2010-2011 season. But Anthony says he needs to think about it.

“I feel good about it. I appreciate them putting it on the table and wanting me to extend my career there,” he says. “At the end of the day, it’s about winning. If I feel I can win there, I will stay.”

Melo is almost guaranteed to make a comparable salary no matter what happens, but if he waits until the end of the upcoming season to make a decision, other teams will get involved and the ensuing bidding war could drive the dollars even higher. Still, Melo’s focus appears to be firmly centered on winning an NBA championship. He tells The Denver Post the Nuggets have “pieces” but need to add more talent to the team in order to get over the hump.