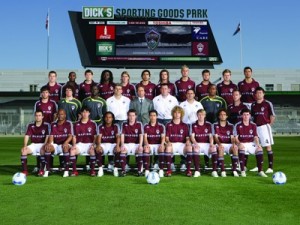 With soccer’s World Cup just around the corner—starting June 11—fans are coming out to watch the Colorado Rapids on the pitch. The Rapids earned a 1-0 win over the Seattle Sounders last weekend at Dick’s Sporting Goods Park in Commerce City before a sellout crowd of more than 18,000, reports The Denver Post.

The decision was just the team’s second win in five games, yet the Major League Soccer standings show the Rapids in a three-way tie for third place in the Western Conference. Hometown hero Conor Casey scored the goal for the Rapids, just weeks after he was passed over for a spot on the U.S. national team.

Despite the weekend game’s bustling crowd, not all players are impressed with American fans’ zeal for the sport and the upcoming World Cup. In a column posted Tuesday on STV—a television station in his native Scotland—Colorado Rapids midfielder Jamie Smith says World Cup fever hasn’t hit the U.S., including Colorado. Smith blames the apathy toward soccer on Americans’ fixation with baseball, American football, hockey, and basketball, and on not knowing much about soccer in general.

“The potential for (the U.S.) to be one of the world’s leading nations in (soccer) is massive, yet it still suffers because of the lack of support and knowledge of the game,” Smith writes.

The Rapids are doing their part to reverse that trend, announcing Tuesday that several Denver-area bars and restaurants have pledged to show every match of the World Cup live.