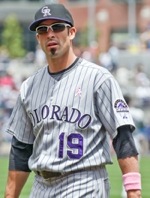 After dropping three of four games to the Houston Astros, the National League’s second-worst team, the Colorado Rockies really needed a win—or three—this weekend. And they got them, sweeping the Toronto Blue Jays on a drenched Coors Field and improving the season record to 33-30.

The Rockies managed to outscore the Blue Jays 16-6 over the three games, showing signs that Colorado’s elusive offense is definitely there—it just needs to be coaxed out from time to time.

Yesterday’s 10-3 explosion came largely through the bat of outfielder Ryan Spilborghs, a fan favorite who has struggled at the plate for much of the season. The team’s perpetual joker hit two home runs and a triple, finishing the series against the Blue Jays 7-12 at the plate, with a triple, two doubles, and three home runs (via The Denver Post).

Spilborghs (pictured) has been tweaking his swing with hitting coach Don Baylor and thinks he may have found the right spot.

“You get your hits, but you still know you’re not doing what you’re supposed to be doing, and it weighs on you,” Spilly tells MLB.com. “You want your ‘A’ swing. We always grade our swings, and I’ve been saying, ‘I’ve got a C-plus, B-minus swing.”

Also helping out on Sunday were outfielder Carlos Gonzalez, who belted his team-leading 10th home run, and first baseman Todd Helton, who shook some of the rust off his bat to go 3-5 at the plate and re-gain some of his missing mojo. Catcher Chris Ianetta—demoted to the minors for a while earlier this season after struggling with the bat—notched two hits yesterday, logging his first multiple-RBI game of the year.

Still, the Rockies find themselves looking up at three teams in the National League West entering the thick of the summer season.