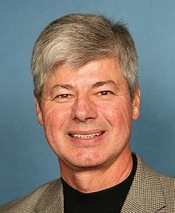 David Hesch of Loveland and his father, Russell Hesch, of West Branch, Michigan, have allegedly taken the grand American tradition of writing a letter to a congressman to new extremes, resulting in their arrest by the FBI, according to the Fort Collins Coloradoan.

The letter to Congressman Bart Stupak, a Michigan Democrat (pictured), is entitled, “Your Vote for National Health Care” and signed “The Devil within us.”

The letter states, in part, “Not to worry, I will paint the Mackinaw [sic] Bridge with the blood of you and your family members. I will not say when and with who but I will save your blood for the high towers toward the end of this project. You will live long enough to truly experience the unfortunate but definite consequences of your decision. You will watch your world slowly crumble and erode around you. Things that used to be important won’t seem so important anymore.”

The Hesch son and father, 49 and 73 respectively, face charges of conspiring to threaten to assault, kidnap, or murder a U.S. official carrying out his duties. The younger Hesch is being held in Denver and could be extradited to Detroit, where his father is facing charges. The elder Hesch allegedly admitted to officials that he wrote the letter and then sent it to his son to be mailed from Denver, apparently hoping the letter could not be traced.

Stupak told the FBI of one of his “historically most vocal and critical constituents,” Russell Hesch, leading to the arrest, writes the Loveland Reporter-Herald, which reports that Hesch has contacted Stupak’s office at least 55 times via e-mail and letters since 2003.