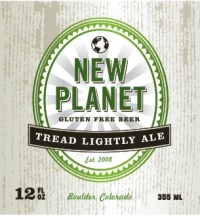 With most brews made from wheat, barley, and rye, finding gluten-free beer is no easy task. But New Planet Beer, a two-year-old company based in Boulder, has accomplished the feat, with a unique recipe utilizing corn and sorghum.

New Planet—founded by Boulderite Pedro Gonzalez, who himself is gluten intolerant—partners with other brewers and breweries to make the gluten-free brew. Tread Lightly is produced by the Fort Collins Brewery, and every batch is tested at the Microbac Laboratories in Boulder to be sure it’s gluten-free.

The bonuses of this gluten-free beer? It’s low calorie—just 125 calories a bottle—and New Planet donates a portion of profits to local nonprofits. This year they’ll give to the Wildlands Restoration Volunteers.

The downside? As someone who can process gluten, I didn’t love the flavor as much as traditionally crisp ales. The substitution leaves a slight bitter flavor, although it cleans quickly enough. And I think the upcoming releases—a raspberry ale and an IPA—will help balance the corn and sorghum flavors.

Tread Lightly was released in Boulder last fall and is being released throughout Colorado this spring and summer.