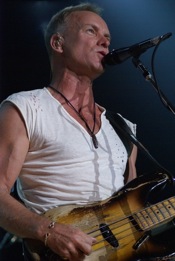 As new estimates were released on the amount of BP oil gushing into the Gulf of Mexico—up to 30,000 barrels a day, double the amount previously thought—British rock star Sting reflected on the economic and environmental tragedy from Denver.

As he prepared for a second show at Red Rocks Amphitheatre, part of his tour with the Royal Philharmonic Concert Orchestra, he wondered how a well nearly one mile below the sea was approved in the first place.

“What were they doing drilling that deep without any safeguards? Who allowed that to happen?” the long-time celebrity asked, during a stop at the Denver Art Museum, where he viewed a painting of southern Colorado, “Mount Blanca with Ute Creek at Dawn,” by his friend Stephen Hannock, whose work Sting collects, notes The Denver Post.

Hannock accompanied Sting to the museum, but neither own the painting. That honor belongs to hedge-fund manager and part-time Colorado resident Louis Bacon, who is mired in a legal battle with Xcel Energy. Bacon is fighting to run transmission lines for renewable energy through his large ranch. Bacon and fans of small-scale renewable power oppose Xcel, which wants to scale back its renewable-energy goals in Colorado as a result of the conflict.