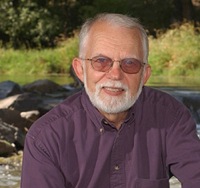 Several years ago, David Norris of the University of Colorado at Boulder made a discovery in Boulder Creek: ethinylestradiol, a female hormone used in contraceptives, as well as bisphenol A and phthalates, both used in plastics and which can mimic the effects of hormones. He also found evidence of pesticides and antidepressants in the water. As a result, the male fish in Boulder Creek can change their gender to female. But thanks to upgrades to a nearby wastewater treatment plant, the chemicals that feminize the fish are being filtered out, according to Reuters, which reports that male fish are now taking longer to be adversely affected. Most of the harmful stuff probably came from products that were flushed down toilets or drains, says Norris (pictured). “This is not the problem of water treatment plants; it’s our problem as human beings,” he says (via CU news release). “We excrete natural and synthetic estrogens and use shampoos, detergents, and cosmetics containing a variety of hormone disrupters that wind up in waterways. All of these different chemicals we are putting into the environment have the potential to alter the biology of animals and to affect ecosystems.”