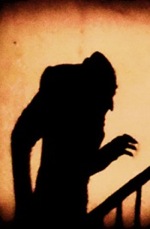 Does a recent vampire sighting in Fruita have something to do with today’s release of The Twilight Saga: Eclipse?

A woman from the small Western Slope town says she spotted the monster Sunday in the middle of the dirt road she was traversing late at night. As a result of the spook, she slammed her car into reverse before crashing into a canal, reports 7News.

When troopers with the Colorado State Patrol arrived, they found no evidence of the vampire—or drug or alcohol abuse, according to 11News in Grand Junction, which has video of the crash scene. 9News, however, points out there was evidence that the woman was not taking her prescribed medication.

Westword provides a few more details, but there’s no word yet on the vampire—whether he was more of a classic Bela Lagosi, a vile Nosferatu type, or a brooding, angst-y teen, a la Edward Cullen.