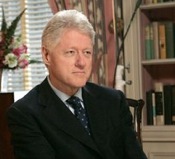 “Andrew brings to this race both an extraordinary record of public service and an extraordinary capacity to lead,” Clinton, still very much a patriarch to the Democratic Party, writes in a letter to Romanoff supporters (via The Washington Post).

Romanoff is trailing Bennet in polls and fundraising, but a source close to Clinton tells WaPo the decision is likely tied to Romanoff’s endorsement of then-Senator Hillary Rodham Clinton for president in 2008.

Will Clinton visit Colorado to campaign for Romanoff? That doesn’t seem be in the cards. The two-page letter will be the extent of Clinton’s involvement in the race, according to The Denver Post.