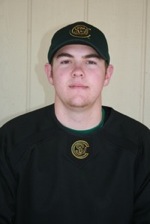 Usually sports teams dream of dominating opponents, so putting up 48 points against an opponents’ combined eight en route to a third consecutive championship would be a good thing.

That’s exactly what the Colorado State University club baseball team did last weekend, once again winning the National Club Baseball Association World Series, its sixth in the NCBA’s 10 seasons (via The Denver Post).

The CSU club team’s record was a mind-boggling 46-7 in 2010, far beyond dominant at the club level. But because CSU and the University of Colorado axed their Division I baseball programs in 1992 and 1980, respectively, club baseball is the only option.

“I’d be willing to say that in a one-on-one game, with our ace going against anybody else’s ace, we’re the best team in Colorado,” says senior catcher Tommy Johnson (pictured), a former Mullen High School star.

Most club teams are meant for players who aren’t good enough for their school’s official team.

That point isn’t lost on Terry Frei, who writes, in a follow-up blog to his Post article, that many club teams around the country probably resent the CSU team: “I wonder if they’re complaining that CSU, the rare school without a baseball program operated by the athletic department, has an unfair advantage….The CSU club team shouldn’t be that good. But it sure is.”