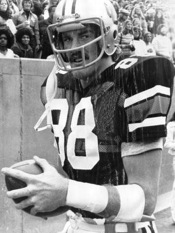 The University of Colorado appears unlikely to retain football coach Dan Hawkins’ services after the upcoming season. Despite committing to Hawkins at the end of last season, it was widely speculated that CU didn’t have or want to pay Hawkins the nearly $3 million a buyout would require.

One of the names that keeps popping up as a potential Hawkins replacement is Mullen High School’s Dave Logan.

The former NFL player and popular afternoon radio host (pictured here during his days playing for CU) is notably successful as a high school coach, going 88-9 in his current seven-season run at Mullen, writes The Denver Post.

And although he’s the only Colorado coach to ever win state championships with three high schools, the Post’s historical analysis of high school coaches making the leap to college coaching shows it usually doesn’t end well.

Meanwhile, CU officials are still trying to figure out how big of a check they’ll have to write to the Big 12 Conference as a penalty for leaving. Earlier this week, The Associated Press reported that Big 12 bylaws would put the penalty at about $10 million.

CU athletic director Mike Bohn, however, says it’s unclear what the penalty would be if the school decides to leave after the upcoming year (2010-11), as opposed to waiting until the end of the 2011-12 season, as originally planned.