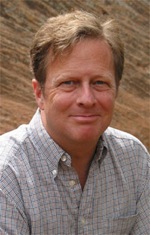 Since 1996, Colorado State University professor Mary Crow has held the distinction of being Colorado’s Poet Laureate. But her reign will end today, as Governor Bill Ritter introduces the state’s seventh laureate, David Mason, who directs the creative writing program at Colorado College.

Both Mason and Crow are expected to be present for a ceremony at the Capitol, notes New West. The poets follow in the footsteps of the state’s first laureate, Alice Polk Hill, who was named in 1919 and held the honor until she died, in 1921.

Mason’s family roots in Colorado go back four or five generations, although he was born and raised in Bellingham, Washington, and did not spend extended time in the state until he became a student at Colorado College in the 1970s. He then lived in several states and Greece before returning to teach at his alma mater in 1998.

The author of several works, including an essay collection and a verse-novel, Mason explains that “so far my work has been almost obsessively concerned with movement, deracination, and identity.” Read some of Mason’s poetry here.