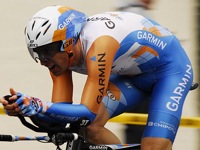 It didn’t seem unrealistic last week to think that Boulder-based cycling team Garmin-Transitions had a solid shot at its best Tour de France ever, but after yesterday’s brutal stage, that goal now seems out of reach.

Christian Vande Velde, by now a veteran of bone-shattering injuries, took another serious spill yesterday. According to The Associated Press, Vande Velde was one of many riders who fell, suffering several broken ribs and a cut above his left eye that required several stitches.

The crash marks the second time in two months Vande Velde has had to leave a major race after falling and breaking ribs.

Garmin-Transitions riders Tyler Farrar and Julian Dean also went down hard, with Farrar suffering a broken left wrist. Both of them will continue in the Tour, but Vande Velde’s run is over.

“I’m indescribably disappointed to not be starting [in the next stage],” Vande Velde tells the Herald-Sun, an Australian paper. “I don’t ever want to have to see another day like today, whether I’m in the race or not.”

If the Tour has left you longing for a good road ride—without the intensity and fierce competition—The Denver Post has a helpful guide of where to ride in the city.