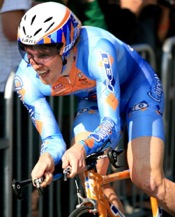 Boulder-based cycling team Garmin-Transitions has never fared particularly well at the Tour de France. In fact, the team has never won a stage at the premier cycling event, or the green jersey for top sprinter, points out The Denver Post, which thinks this just might be Garmin-Transitions’ year.

But one of the team’s prominent riders, Christian Vande Velde, won’t likely be making a big push.

Vande Velde, whose injury-filled past was documented by 5280 deputy editor Geoff Van Dyke last July, has suffered a hip injury, a lung infection, a broken collar bone, and cracked ribs this year. Still, he’s working on getting back into shape for the Tour this weekend.

The team’s best hope is Tyler Farrar (pictured), who has already won five races this year. He’s also benefiting from the team’s acquisition of Johan Van Summeren and Robbie Hunter, who the Post calls perhaps the best lead-out sprint duo the team has ever seen. And Farrar’s nemesis from last year’s Tour, England’s Mark Cavendish, is having a bit of an off-season so far, causing drama in several races and appearing rather off kilter.