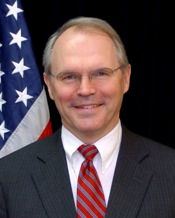 Christopher Hill, the U.S. ambassador to Iraq, has been named the new dean of the University of Denver’s Josef Korbel School of International Studies, which counts among its renowned graduates former Secretary of State Condoleezza Rice.

Hill is retiring after more than 30 years in the Foreign Service and will begin his appointment in September, reports The Associated Press. Hill, who has served in Iraq since 2009, was part of the U.S. negotiating team involved in the Bosnia peace settlement and led the U.S. delegation to six-party nuclear talks over North Korea.

In a statement, Chancellor Robert Coombe says of Hill, “If one considers his tremendous experience and great success as a Foreign Service officer and diplomat, it’s apparent that this is just the sort of career for which we are educating our students at the Korbel School. He’s going to be a great dean” (via the Denver Business Journal).

In a statement of his own, Hill says he is “delighted” to come to the school, calling it the “opportunity of a lifetime.”