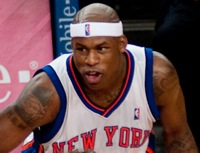 By now, it’s well-known that the Denver Nuggets don’t have the cash to make the upgrades that could put the team over the top in the stacked Western Conference.

Because of what the Nuggets owe Chris “Birdman” Andersen, Nene, and Kenyon Martin, the team is perilously close to the luxury-tax threshold that would make new players very expensive.

That doesn’t mean Denver won’t try to upgrade, as evidenced by yesterday’s signing of Al Harrington from the New York Knicks. Yahoo! Sports reports that the Nuggets gave the forward a five-year, $34 million contract, bolstering team depth and giving opposing teams something to think about other than stopping Carmelo Anthony.

The 30-year-old Harrington has averaged 14.1 points per game over his career, but he’s entering his 13th year and he’s not a dominant center, which is what the Nuggets really need to compete against teams like the Lakers.

For Melo’s part, he may well want to play in New York with Amare Stoudemire and Chris Paul, forming a trio capable of taking on the new super-team in Miami with Lebron James, Chris Bosh, and Dwyane Wade. Paul hinted at the move during Melo’s wedding last weekend, writes the New York Post (via Westword). Nuggets fans are hoping it was merely a drunken wedding toast, but it very well could happen.