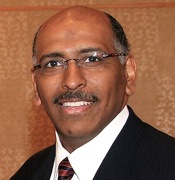 No matter how dumb you think national Republican Party chairman Michael Steele’s recent remarks about Afghanistan were, he wants you to know he “ain’t going nowhere.” No, that’s not a statement on his career potential. It’s his way of saying that he’s going to stick around—even if you think he’s a numbskull.

In case you missed it, earlier this month Steele chided President Barack Obama’s handling of the war in Afghanistan at a fundraiser in Connecticut, suggesting it can’t be won (via The Associated Press). Of course, Steele’s losing mentality sparked a lot of knee-jerk questions about his patriotism.

Congressman Mike Coffman, a Republican and war veteran, was on hand yesterday to sort out the mess, telling reporters, “I certainly wasn’t happy about” the comments. But after talking to Steele, Coffman said, “I think he should stay on. He gave me the confidence he can lead this party forward.”