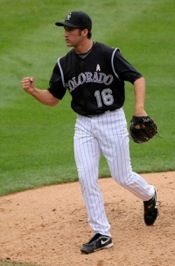 The Colorado Rockies pulled off their third walk-off win in a row last night at Coors Field. The St. Louis Cardinals were on the wrong end of one of the biggest ninth-inning comebacks ever Tuesday night, but they managed to carry a five-run lead late into last night’s game.

Then the Rockies started chipping away.

Dexter Fowler, who’s been on a hot streak since returning from a minor-league demotion recently, cracked a three-run home run to tie the game in the seventh inning, setting the stage for another late-inning win for the Rockies.

Closer Huston Street (pictured) continues to return to form, pitching a perfect ninth inning and giving his team the opportunity to win in the bottom of the ninth. It didn’t take long. Catcher Chris Ianetta was the first to the plate and promptly blasted a solo home run over the left field wall to end the game (recap via St. Louis Post Dispatch).

The Rockies have won seven of the last 10 games, and they’ve done it without traditional sluggers like shortstop Troy Tulowitzki and first baseman Todd Helton. Tulowitzki broke his left wrist after being hit by a pitch in Minnesota a couple weeks ago and will return, but the also-injured Helton’s future looks unclear.

The Rockies called up Brad Eldred from Colorado Springs to man first base, perhaps paving the way for him to replace Helton. According to Purple Row, Eldred has hit the most home runs of anyone in the Rockies organization this year (22), and went 3-for-4 at the plate yesterday.