The wretched hacking a couple of rows ahead was incessant. Crammed onto a packed bus in the suffocating African heat with windows that wouldn’t open, Margaret Freedman could do nothing but think about her destination—the coast of Kenya—and try to ignore the man’s coughing for the two-hour trip. Freedman, a nursing student at Regis University in Denver, was working at a clinic for orphans in Kenya for the summer. She and three missionaries had boarded the bus for a weekend getaway. Little did she know that the stifling bus ride would become a much larger part of her life than just a passing mention in her travel journal.

That morning, Freedman and her traveling companions joined the ranks of nine million people who every year report they are infected with tuberculosis (TB), a contagious airborne disease caused by slow-growing bacteria called mycobacteria that most frequently attack the lungs. Back in Denver five months later, Freedman began having trouble breathing; nighttime meant lying awake with fevers and sweats, gasping for air from body-racking coughing spasms. Doctors repeatedly treated her for pneumonia, but the misery persisted. “It was like sandpaper rubbing against sandpaper every time I breathed,” Freedman recalls. “My fiancé would put his hand on my ribs and feel the stuff in my lungs bubbling.” 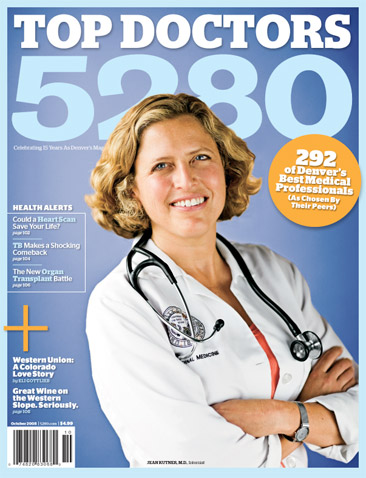 After a pulmonologist drained the fluid from Freedman’s chest to examine her lungs, he administered a skin test and, alarmed by the result, sent her to the TB clinic at Denver Health the same day. She began treatment for pleural TB, a bacterial infection of the sac surrounding the lungs. During the nine-month treatment regimen—”directly observed therapy” that requires medical staff to monitor in person the patient’s repetitive intake of medication—Freedman, a sophomore, dropped all but one class at school and endured relative isolation from her peers, even though proper medication renders the disease noncontagious. “Even though I told everyone I’m not contagious, my roommate got rid of my mattress, and a lot of people got tested,” she says. “[There was] a big stigma against me, and even though I told them the facts no one believed me. It’s a hard disease to understand.”

In the 1800s, when TB was known as “consumption,” the afflicted descended upon Colorado from across the country because of the state’s supposed healing benefits: fresh mountain air, dry climate, and sunshine. Sanitariums, or TB hospitals, popped up all over the state—National Jewish, Swedish Medical Center, Craig Hospital, Lutheran Medical Center, Porter Adventist Hospital, and St. Anthony Central Hospital all started as such. Mt. Sanitas in Boulder was named for the sanitarium that rested at its base. Among Colorado’s notable patients were Wild West legend Doc Holliday, former Denver Mayor Robert Speer, and revered architect Temple Hoyne Buell.

Today, there are 105 known cases of TB in Colorado, which categorizes Colorado as a low-incidence state (fewer than 3.5 cases per 100,000 people). Fortunately, those Coloradans who do suffer from TB are in reasonable proximity to Denver’s National Jewish Health, one of the country’s most prestigious pulmonary and respiratory hospitals, and a leader in TB treatment. Just north, Colorado State University has a leading TB research lab whose mission is developing new drugs. The global outlook, however, remains unsettling. The World Health Organization estimates that more than two billion people, nearly one-third of the world’s population, are currently infected with microbes that cause the disease. TB can range from a latent form that supplies no noticeable symptoms to a full-blown, multiple drug-resistant strain (MDR TB), in which bacteria has mutated beyond the curative reach of a typical three-drug cocktail. In 2006 the world saw the highest rates of MDR TB in recorded history.

About two million people worldwide die from the disease annually and yet, until one hapless lawyer from Atlanta boarded a plane to Europe last year, TB was considered by most as little more than a vague respiratory problem that afflicted people in the 1800s—an obscure malady that doesn’t affect enough people today to be a significant cause for concern or deserve widespread research funding. Andrew Speaker’s MDR TB diagnosis, his subsequent decision to travel against the CDC’s advice, and his eventual treatment and quarantine here at National Jewish triggered an international media blitz, and suddenly the public perception of TB went from rare condition to potential health crisis. After all, a young, healthy, affluent resident of the United States had contracted a disease spreadable through as little as a cough or a sneeze, and the implications were alarming.

Active TB bacteria can settle and grow in the lungs, destroy tissue—even eat a hole in the lungs—and spread to the kidney, brain, or spine. If left untreated, an individual with active TB can infect an average of 10 to 15 people every year. “If you have TB and go to the bar, get on a bus, or walk in the office, and you infect others with this lethal disease, public health [systems] have the responsibility,” says Dr. Michael Iseman, a professor of medicine at National Jewish and former chief of TB services. “It is not a personal problem, it’s a public problem.”

TB thrives in compromised immune systems, so anyone without access to adequate health care is at serious risk. Even if victims in developing regions like Africa or Central America are diagnosed, the chances of completing treatment for the full six- to nine-month course are low, given the limited supplies of drugs and proper facilities. Insufficient treatment allows the bacteria to mutate into a form that typical drug cocktails can’t eradicate. In 2006, foreign-born individuals accounted for 84.5 percent of drug-resistant TB cases in the United States. In Colorado, about 67 percent of new TB cases are foreign-born. “People immigrate to parts of the world where structured care is available, and they bring drug-resistant strains of TB with them,” Dr. Iseman says.

Naturally, locating and treating infected immigrants is a challenge, especially if they are unaware that they’re carrying the disease. Immigrants who apply for visas or green cards receive automatic screening for TB, but that still leaves an unidentified number of illegal entrants who never get tested. Other at-risk individuals, such as the homeless, are difficult to track for appropriate evaluation. The TB test—a skin prick and subsequent “reading” of the injection point three days later—can be ineffective at shelters and free clinics that deal with such a transient population. The global spread of HIV/AIDS has been perhaps the biggest perpetuator of TB, and the primary contributor to the disease’s resurgence since the 1990s. By depleting the body’s immune system, HIV/AIDS clears the way for the mycobacteria to wreak havoc. “[AIDS has] just been gasoline on the fire—a pervasively difficult problem to address with available medical means,” Dr. Iseman says. “It scares you witless, because what are we going to do? Change sexual behavior? I don’t think so.”

Researching new drugs to counter these emerging strains of drug-resistant TB is a priority at CSU. Unfortunately, progress is slow-going. The university has received $95 million over the last 15 years to fund TB research, including a recent prestigious $1.1 million Gates Foundation grant to study the effectiveness of TB testing systems. Nevertheless, a truly innovative drug hasn’t been developed since the 1960s.

Part of the problem, says Dr. John Belisle, director of CSU’s Microbacteria Research Lab, is the lack of interest from pharmaceutical companies. Since the majority of TB cases happen in developing countries, most patients can’t afford drugs, which means there’s no incentive for drug companies to sink research dollars into the product. It’s far more likely for a pharmaceutical corporation to fund drugs that treat conditions prevalent in affluent societies. Though he’s optimistic about CSU’s research prospects, his expectations are pragmatic. “It’s an issue of control versus elimination,” he says. “TB is not a disease we’re going to easily eliminate, even from a population that’s reasonably healthy.”

Federal legislative efforts on TB drug development also have stalled, largely because TB is still a stigmatized disease that lacks active political advocacy. “The real bottleneck is in clinical research,” says Dr. Randall Reves, director of the Denver Metro Tuberculosis Control Program. Even if a promising new drug emerges, it takes years of additional clinical trials on infected volunteer patients before the treatment can hit the market. Federal legislators introduced the Comprehensive Tuberculosis Elimination Act last summer to address this problem, but Reves, who testified in support of the bill at a committee hearing last October, ran into senatorial opposition to mandates that were so disease-specific.

Margaret Freedman, now 23, finished her treatment at the end of 2006 and has graduated from nursing school. She only occasionally experiences mild pain from scar tissue. Last summer, a 19-year-old girl in Colorado Springs wasn’t so lucky: The CSU-Pueblo student from Nepal died of TB shortly after arriving at the Memorial Hospital emergency room. Freedman says she’s grateful to have received such high-quality care at Denver Health. She knows that the man on the bus in Kenya probably has yet to receive treatment, if he hasn’t already succumbed to the disease. But her experience won’t keep her from going back. “I gained a lot of respect for the disease—a knowledge and awareness. My senses are heightened because of it,” she says. “I have a huge passion for Africa. I want to live there and do nursing someday. I’m not going to let the fear of TB keep me from doing that.”