Mikhail Dantes opens the front door to his midcentury revival in Hilltop accompanied by his dog Oskar. Fourth in a family of O-named dogs (Ophelia, Oliver, and Olivia round out the pack), Dantes’ tail-wagging beagle looks like he belongs in this home: His fur—muted gray, chocolate brown, and dove white—effortlessly complements the exquisite contemporary furniture that surrounds him. The same goes for Dantes, who, dressed in a flawless, three-shades-of-gray ensemble by French designer Lanvin (accessorized with shiny black Dolce & Gabbana shoes), effortlessly blends into his surroundings.

This enviable perfection might be intimidating were it not for Dantes’ disarming demeanor. “Come on, let’s have a seat,” he offers gently. No matter that the “seat” is an original chrome chair by midcentury-modern furniture designer Milo Baughman. For the slender, dark-haired Dantes, 44, design is not about ego. Rather, it’s an effortless, Zenlike elegance—one that he’s cultivated slowly over 19 years in the Denver design world. The fact that his dog matches his sofa (whether intentional or not) just makes him that much more likeable. It’s his job to surround himself with beautiful—and beautifully coordinated—things. 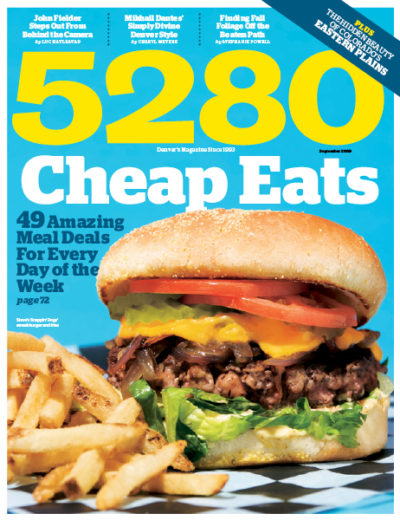 “When I come up with a concept for a client’s home, I usually get it right the first time,” Dantes says, a little reluctantly, when explaining his design process. “I don’t want to sound like I’m bragging. It’s just that I’m really good at listening to people.”

If Dantes seems humbly confident, it’s because he’s earned it. When he was 24, he opened his own residential design business, D+D Interiors, which has since become one of Denver’s most sought-after firms. And when he’s not pulling paint swatches for the high-end clientele at D+D (the second “D” is for his brother, Ron Dantes, who keeps the books), you’ll find Dantes meticulously tweaking displays at Town, the three furniture showrooms—totaling 20,000 square feet—which he co-owns at the Denver Design District.

Dantes opened the first Town store out of necessity: Unable to find the kinds of high-end furniture and fabric lines his clients’ homes called for, he decided the best answer was to open his own shop. So in 2003, he and his business partner—and life partner—Eddy Doumas (an accomplished designer with A-list clientele in Vail and Avon) created the Town Showroom, which championed craftsmanship, and introduced Denverites to designers like Maxine Snider, Helene Aumont, and Victoria Hagan. Shortly after Town came Town Studio and Baker at Town, two more showrooms from the duo, which showcase (slightly) more affordable designers like Ralph Lauren, Calvin Klein, Baker, and the venerable Barbara Barry.

“I think Town is the best thing that has happened to Denver in terms of design,” says Barry, who’s based in Los Angeles. Barry is among several world-renowned designers that Dantes and Doumas have invited to Town for meet-and-greet events for the local design community. “They have not overdone the presentation, allowing one to imagine it in their own way. Good design speaks for itself, and Town understands that. Mikhail Dantes embodies elegance and grace—he is an ambassador for taste.”

Like any good ambassador, Dantes travels the world in search of inspiration. At least twice a year, he and Doumas jet to Paris, London, New York, and other style centers to sniff out what’s “next,” bringing home with them exquisite swatches of bespoke wallpaper and Asian-inspired wingback occasion chairs. This June, Dantes spent two weeks on the coast of Greece.

Yet, Dantes’ international aesthetic doesn’t feel out of place in rustic, outdoorsy Colorado. Chalk that up to the fact that the Philippines-born Dantes is a Denverite at heart. His parents immigrated to southeast Denver when he was less than a year old, and he’s spent his entire career in the city. This, he admits, gives him an inimitable perspective on how to design for clients here; it’s what gives his aesthetic such a strong sense of place. “When you live near the mountains, you want your home to feel like it belongs near the mountains, not like some flat in New York City,” he says. “We in Denver appreciate elegance, but there’s also a casualness about living here.” Which is why, he says, he layers organic textures like rattan, leather, or linen in all of his designs. The resulting clean, contemporary style feels comfortable, whether you’re wearing Prada or Teva.

“My beiges aren’t boring,” he says at his home, a 4,000-square-foot ranch that he recently codesigned with Denver architect Scott Parker. He’s right—even though it’s comprised of shades of white, buff, and gray, no one would say the space is bland. It’s the details—like the grass-cloth wall coverings or strategically placed Grecian prayer beads—that are both subtle and surprising. “I’m not big on embellishments; I try not to overcrowd a space,” Dantes says. “I let each piece speak for itself.” Just as each home he’s decorated speaks for him.