Laurel Quint was on a quest for the typical Denver real estate dream: an old home with character, in a neighborhood where the kids could play outside, and at a price that wasn’t ridiculous. In the current market, rarely do all three come in one snug package. But when the single mother came across this stuccoed Art Deco cottage in Mayfair, she realized it also fit perfectly into the larger strategy she imagines for her life. Its 950 square feet made it the ideal transitional home for a self-employed woman with three young children.

Quint considers the house’s petite proportions a distinct advantage. She wanted a place that would let her be close to her kids and her design business, Q Interior Design, which she runs out of the converted garage. “I also wanted something small enough that I could clean myself,” she says. For now, she can manage the house, the kids, and the business easily, but Quint knows that as her business blossoms and the kids grow up, she’ll move into larger digs and a more conventional office-that’s the strategy. 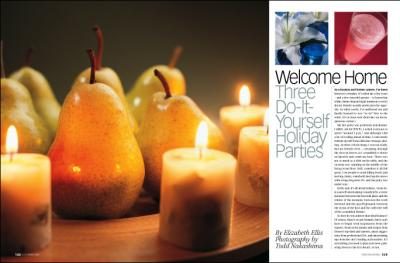 Practicality aside, the home offered something even more appealing to this interior designer: good bones. First, a recent renovation on the kitchen and bath had already been completed. The home’s hardwood floors and plaster walls gave her a neutral palette with which to play. It had a manageable yard, and the garden was mature. And most importantly, the majority of the rooms opened onto the outdoors. “It’s like a little house that had been plucked out of Santa Monica and dropped into Denver,” she says.

When it came time to design the interior, here too Quint had a smart strategy for the long run. “I buy the best pieces I can afford,” she says. For years she had been buying selectively rather than buying to fill rooms, and her conscious decision to put quality over quantity has clearly paid off—she has small rooms anchored with delightful finds such as Holly Hunt sofas and Venetian lamps.

Before moving any of her furniture, she did sketches of each of the major spaces. “I like to see at least three different arrangements for each room,” she explains, “and drawing is easier than hauling.” Why different arrangements? “It’s like a haircut—you look for versatility,” Quint says. “Some days you want conservative, other days minimalist; on winter days you might want piles of books and blankets all over the place.”

Most of the time the rooms are neither stripped down nor maxed out. Rather, they are a carefully crafted balance of good furniture, vivid contemporary art, cultural artifacts, and the occasional floral focal point. The living room, which is barely 200 square feet, revolves around the small fireplace and its French-gray-painted surround. Even within the small space, Quint has avoided the temptation to put the furniture flush against the walls. “You should feel the space around furniture,” she says. A square-shaped Holly Hunt-designed sofa anchors one wall, deep enough to tuck yourself into it and read the morning paper. Near the outside windows, Quint has placed a wool-upholstered chaise from Donghia that functions like a chair but is large enough for two. To anchor the design, Quint used the rug as the starting point.

The television room is less formal and less classical. Here, the kids are allowed to romp on the sofa while Quint cooks meals in the next room. A pair of French doors connects this tiny space to an even tinier side yard, where the family eats outside all summer long.

While Quint finished these living areas sparingly, she took the opposite tack in the dining room, deliberately flouting this room’s demure dimensions with larger, almost oversize pieces, a trick designers use to create a sense of intimacy within a room. The warm salmon hue makes for an inviting atmosphere, but it took Quint three months to find the perfect shade. She daubed more than a dozen different colors onto the walls before she realized that the color she wanted was already in the window coverings she’d chosen, and after a few quick comparisons she found the perfect match.

Quint fostered a sense of relationship in the main rooms, but for her bedroom she craved a sense of sanctuary. The requirements for this room were very simple: “It just had to make me happy,” she says. By happy she means a place where she can indulge her fondness for decadent design, and the bedroom reigns as the most indulgent of the four major rooms. The light sconce mounted on the mirror is in the French Art Deco style. The chair is a James Mont Greek key chair. Quint, who hates “flouncy beds,” ordered spare, classic, custom-designed Italian linen with a Greek key motif. But the room’s biggest extravagance is the draperies. Quint selected featherlight wools in cream, purple, and black, then had them sewn into panels with a 15-inch French pleat at the top. “They are like a woman’s dress,” she says, “tailored to the waist, then billowy and beautiful.” And functional in a way you might not expect. “My bedroom is my haven,” she says. “To have those drapes framing that garden view means the world to me.”

For now, the home offers Quint a blend of togetherness and sanctuary while she advances her business—and watches her children grow. “It’s smaller than I will eventually need,” says Quint, “but for now it’s all I want. I love the connectedness it gives us as a family.”