Ballet Nouveau Colorado’s Garrett Ammon’s brought his contemporary artistic vision from Memphis to Denver two years ago because he saw an ideal city in which to test people’s perception of ballet. The result? Performances such as this month’s Intersection (Nov. 1 at the Lakewood Cultural Center; Nov. 6-8 at the Performing Arts Complex at PCS, Federal Heights), a collaboration with the Lighthouse Writers Workshop that blends words with dance. Here, 5280 gets Ammon’s take on the “philosophy nouveau” and a peek at the upcoming show. 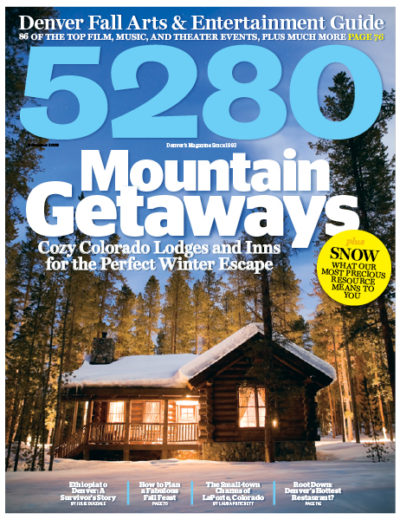 So, is this actually ballet?
In the entire company we have 12 professional dancers, all classically trained. We take rules, guidelines, and structures and look for new ways to bend them. To [uninitiated] viewers, it might not look like ballet. We’ve stripped away traditional expectations. We like to think of it as getting down to the core.

Was it difficult to sell something so avant-garde in Denver?
Most Denverites don’t give themselves enough credit. I’ve been incredibly impressed by the wide array of art here. This city is growing into one of the most important centers for cultural exploration in the country.

Tell us about Intersection.
It explores a young man who inexplicably leaves his world, not knowing where he’d been or who he is. We’re going to be merging poetry and dance, and we’re working on putting in some projection work—very multimedia. But we’ll continue to focus on dance itself. I want people to see how much dance can touch, move, and inspire us.

After a season of controversy, the Denver Film Society’s new executive director looks ahead.

When twenty-plus staffers, including top management, quit the Denver Film Society (DFS) in June because of unresolved tension with a new executive director and the board of directors, anxious questions arose among local movie lovers. What about Film on the Rocks? Will there still be a Denver Film Festival this year? Do we have to catch our movies at—gulp—the local multiplex?

A little less than a month later, the organization replaced its director, Bo Smith, with a new boss, Tom Botelho; all the departed employees returned to their posts; and festival planning resumed. Botelho was far from an outsider. He’s been on the Film Society’s board for 13 years, has more than 20 years in the advertising business, and spent 11 years in marketing positions at the Denver Post and Denver Newspaper Agency. What compelled him to take on the DFS full-time? “There wasn’t a lot of convincing to be had,” he says. “I love this place. We live in a very evolved city. [Mayor John] Hickenlooper is really a big believer in the culture class.”

Botelho says the Film Society’s 2,000-member core audience is 40 to 60 years old, so his first priority is to diversify. The DFS plans to lure students with free screenings and hip film programs, plus a partnership with the University of Colorado Denver’s College of Arts & Media. The group is creating an enhanced WomenPlus film program to attract movies by, for, and about women, and DFS is also hoping to draw more Hispanic interest for this year’s Starz Denver Film Festival by focusing on Mexican cinema and collaborating with Aurora’s Cinema Latino, which will provide Spanish-language films.

With presales putting the Starz festival on target to follow last year—the most well-attended festival in its history, with more than 42,000 attendees—and other international cinema programs lined up, such as December’s highly stylized Japanese screenings, a Film Society that seemed to be teetering on the edge a few months ago has righted its ship. The multiplex, thankfully, can wait. (Nov. 12-22, www.denverfilm.org)

Thornton-based Colin Livingston will showcase his “Post-Pop” sensibilities in “The Big Idea” at LoDo’s Plus Gallery (December 4 to January 15). The exhibit mimics a retail store, with display racks, sign-age—even a cash register. The “products” are Livingston’s graphically sleek and colorful paintings and sculptures, boxed up as if on sale at a big-box store. “I want it to be really overwhelming, like buying something in Wal-Mart,” Livingston says. “That environment can be soulless and commercial, but it also can have the style of fine art.”

Livingston grew up in Arvada and attended the Rocky Mountain College of Art and Design, where his paintings mostly evoked somber impressions of his late mother, who committed suicide when Livingston was in the fifth grade. Over time, his message became more positive, as evidenced by his finishing flourish for “The Big Idea” pieces. Each one comes with six interchangeable stick-on logos with phrases such as “I Love You” or “Take Care”—seemingly trite clichés of positivity that Livingston, who became a first-time father of twins this summer, wishes people would heed more readily. “The phrases are life lessons from tragic events or moments of epiphany,” he says. “It’s about trying to remember and hang onto them.”

This element of audience participation is what moves Livingston’s work into the “Post-Pop” category. “[He’s] pursuing a more complex level of engagement,” says Plus Gallery owner and director Ivar Zeile, who has hosted three previous Livingston exhibitions. “He is definitely taking Pop Art into a new direction by allowing collectors to ‘collaborate’ on a painting to make it their own.”

They call him the Grand Master of Adventure. The 78-year-old Clive Cussler, author of more than 40 best-selling action novels, called Lookout Mountain home for 30-plus years until he moved to Arizona in 1991. But with frequent sojourns to his Telluride getaway, plus the Cussler Museum in Arvada—his vintage-automobile shrine—the author’s presence lingers in the Centennial State. This month, look for The Wrecker, a historical crime thriller about the rowdy West. Recently, 5280 caught up with the tireless Cussler to talk shop.

Give us a sneak peek into The Wrecker.
I’ve written all these sea stories, so I thought it’d be fun to do a Western. It went so well that the publisher wanted a series. The plot started out in the 1950s, but I moved it to 1906 so I could get in the old cars and trains and locomotives. Then we put it in San Francisco so we could get in the earthquake and fire.

How are you different from other writers?
I consider myself more of an entertainer, and I try to make the reading fun. If the action slows down, I’ll start the next chapter with dialogue. I always try to do something other writers don’t.

You use a lot of maritime lore in your stories, yet you’ve made your homes in landlocked Colorado and Arizona.
I’m out on the sea one or two months of the year. In July, I was out on the North Sea; we’ve been looking for a number of years for the USS Bonhomme Richard wreck.

Any plans to cap your pen—er, keyboard—for good?
I have joked about this. I’d like to retire, but they won’t let me. I’m 78. I’m not going to be around forever. But I’m obviously never going to retire.

With two recent EP releases, a second full-length album on the way, and a busy live show schedule, Paper Bird—Top Local Band in 5280’s 2009 Top of the Town issue—is becoming one of the most ubiquitous and influential noisemakers along the Front Range. Fronted by vocalists Sarah Anderson and sisters Genny and Esmé Patterson, the seven-piece band uses a wide range of influences to create its harmonious and folky sound. Earlier this year, Esmé Patterson chatted with us about the band’s past, recording its latest album, and its future plans.

What musical influences led to the band’s sound?
Our dad always sang, and our grandfather was an opera singer. We were raised listening to Motown. Between the seven of us in the band, we listen to everything, from reggae and AC/DC to Hanson—really—to classical jazz. We never planned to sound “like this.” It’s hard to explain, but there’s no premeditation whatsoever. Not to get really New Agey, but we’re communicating on some level we can’t explain.

What’s it like to start up a band in Denver?
Everybody’s just helping each other by inviting you to play shows or sing on their record. There’s this community that’s so involved, and everybody believes in each other. The Flobots did that for us. Talk about a weird musical pairing! But every time we play with them we make a bunch of new fans. It is a smaller city, and the scene is so localized, and there aren’t that many venues.

When can we expect to see your second full-length album?
Very soon. We’ve got all the songs recorded, and now we’re embellishing. We’d love to get it out, but we have such a tendency to rush things. I’m really excited by this one; we’re trying to give the songs the time they deserve.

Artists roam. They go where inspiration, impulse—and, of course, job openings—steer them. This fall, Kent Thompson begins his fifth year as artistic director of the Denver Center Theater Company, following 16 years at the renowned Alabama Shakespeare Festival. Before settling here, he roamed, teaching theater at Juilliard and Boston University, and working in, among many other places, North Carolina, Virginia, New York, Canada, and England.

Under Thompson, the DCTC is developing a national reputation, particularly for works written by nontraditional playwrights. Thompson established the Women’s Voices Fund, an endowment that commissions new plays by women. “In the 26 years before I got here, [the company] had presented about 250 plays, only seven written by women,” Thompson says. Today, among the top 10 to 15 plays produced nationally each year, about 40 percent are written by women, a much higher rate than a few decades ago. “Women are writing plays that men can’t and don’t write,” he says. “These aren’t just ‘chick flick’ kind of plays. Their imaginations, issues, stories, and voices are different, so it’s an interesting time for women in theater.”

The DCTC applies the same principle to recruiting more African-American and Latino-written plays, primarily via its annual New Play Summit. Two of this season’s highlights will be Well, by Lisa Kron, a funny, touching look at a mother-daughter relationship tested by the mother’s ill health, and When Tang Met Laika, by Rogelio Martinez, a fanciful love story set amid the Cold War.

For Thompson, plays like these, and the DCTC’s varied lineup speak to local audiences in their own language. “Our shows often look at what it means to be an American in an increasingly global world. We want there to be a regional aspect to it,” he says. “I think our perspective on America and the world from the base of the Rocky Mountains is just different and unique, and I want the plays to reflect that.”

For a complete listing of this season’s performances and ticket options, go to www.denvercenter.org.