Want to make BBQ at home? Click here for recipes from some of our favorite restaurants. Prefer to go out? Read certified BBQ judge Adrian Miller’s guide to the city’s best BBQ restaurants.

In case you haven’t noticed, Denver is enjoying a surge in barbecue restaurants. Unlike Kansas City and Memphis, which are known for certain barbecue specialties and styles, in the Mile-High City we tend to mix everything together on one eclectic menu. And given our long—albeit largely unknown—history with barbecue, it comes as no surprise that we’re a true melting pit. As with most food history in the United States, it begins with the Native Americans. Those who inhabited the Great Plains—including what we now call Colorado—regularly smoked strips of bison and venison, and stored the meat for use during lean times. Today, we call this extreme form of barbecue “jerky.” So, barbecue, as a cooking method, was well established by the time the European explorers, fur traders, and gold-seekers entered the Rocky Mountain region. Denver’s barbecue larder changed forever with the Gold Rush of the late 1850s. Pioneers and settlers brought with them cattle, pigs, and sheep. And as the livestock-raising—and later slaughterhouse—industry thrived, these same animals got equal time in the barbecue pits.By the late 1800s, Colorado towns had developed a civic tradition of celebrating a food item—corn in Loveland, melon in Rocky Ford, the potato in Greeley—with the help of a big public barbecue. These diverse food celebrations had several things in common: They usually took place in the fall, barbecued lamb was the starring attraction, African-Americans tended the pits, the crowds of thousands ate the celebrated ingredient and the barbecue, and everything was free. Though these traditions mostly died out by the mid-1900s, some towns still hold the festivals—but the big, free barbecue is a faded feast. Instead, we have the barbecue restaurant. And many of Denver’s spots share a similar biography: A well-traveled owner, an appreciation of ‘cue from various regions, and the best of it melded on one menu, Mile-High style. Here, our guide to the best. 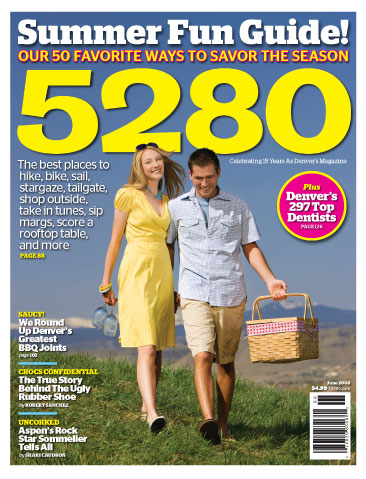 From tiny mom and pops to giant national chains, these local joints consistently do it up right.

Bones to pick The area surrounding the trailer can be very muddy, the ‘cue is served covered in sauce, and Jim likes to talk…a lot.

Bones to pick The beef brisket could use more smoke, and the meat is brushed with sauce before it’s served.

Countrytime BBQ
Countrytime, which opened in southwest Denver in August 2007, advertises its barbecue as “wood-pit smoked.” (For proof look to the woodpile next to the smoker.) This new establishment is a bare-bones operation with a few stools, Styrofoam containers, plastic silverware, and ungodly good eats.

Order up Thick slices of well-smoked beef brisket, a generous mound of pulled pork, and medallions of spicy sausage

Bones to pick It’s pretty much a take-out place without telling you so—and the staff doesn’t always answer the phone.

Bones to pick The beef brisket tastes more like roast beef, and the kitchen puts too much sauce on the chopped brisket servings.

Jim ‘n Nick’s Bar-B-Q
This Birmingham, Alabama-based chain came on the Denver barbecue scene in 2006, and they’ve made their mark by serving up genuine Southern-style barbecue. This shop is named for Jim and Nick Pihakis, a father-and-son team who typified how Greek immigrants to the South have embraced all things barbecue.

Order up Pulled pork, spareribs, the sausage
and pimiento cheese appetizer—and cheese biscuits so good they could be classified as a controlled
substance.

KT’s BBQ
Kirk and Tricia Jamison were so inspired by the legendary Pecos Pit BBQ in their hometown of Seattle that they modeled their own barbecue joint after it. And thus, KT’s BBQ first opened in Boulder in 1992. Now the eatery, which dishes out Memphis-style barbecue, has two locations in the Boulder area, one in Broomfield, and a Denver eatery in the works.

Order up Meaty baked beans, incredible coleslaw with a great balance of vinegar, crunchiness, and creaminess, and the “June Bowl”—a layered salad of barbecued meat, barbecue sauce, and a barbecue side such as coleslaw

Bones to pick We didn’t get much flavor from the chicken and pulled pork.

Paradise BBQ
No, this isn’t a misprint—Paradise BBQ is a fresh-from-the-smoker brand of barbecue that can be found at select Whole Foods. While shopping one day, we were pleasantly surprised by the smoky perfume of applewood and made a beeline to the counter. What we tasted surprised us even more: Flavorful cuts of meat pulled and chopped right before our eyes. (Note: Only these Whole Foods have smokehouses on site, so plan accordingly.)

Order up Flavorful pulled pork (make sure you get the outside “bark” where the seasoning lies), excellent beef brisket, and tender chicken

Bones to pick The sausage was a garlic sausage (not the hot links variety normally associated with barbecue), the smoked turkey was cold, and we didn’t get much seasoning on the baby back ribs or the spareribs.

Brothers BBQ
We credit the recent wave of Denver’s barbecue proliferation to Chris and Nick O’Sullivan, the British-born siblings who, a decade ago, set up their first shop close to George Washington High School. Brothers BBQ has been making loot ever since, but the goods have grown inconsistent—sometimes it’s good, and other times it’s just OK. Even so, we’ll give the boys a shout out, with the hopes that they get their groove back. If you do go, the savory pork shoulder sandwich and the meaty baked beans are dependable.

M&D’s Café
Since 1978, Mack and Daisy Shead have served up righteous ‘cue in their combo barbecue-Southern food spot in Five Points. We frequent M&D’s for the side dishes (don’t miss the cornmeal-battered fried green tomatoes) and the unforgettable peach cobbler as much as we do for the barbecue. Yet, these days, consistency seems to be an issue; opt for the pork spareribs, a safe bet and standout.

First Reported Public Barbecue
January 8, 1863 Colorado’s Democratic Party held its political convention in Golden City, the then-capital of the Colorado territory. The party threw an event that the Weekly Commonwealth, a Denver newspaper, deemed “the first barbecue ever given in Colorado.” On the menu: an ox and a pig.

The Biggest Businessman’s Lunch
September 6, 1882. Denver’s business community decided to give a free barbecue to 4,000 hungry souls. Newspaper accounts of the day said that many of the diners were curiosity seekers who had no idea what a barbecue was. On the menu: ox, pigs, sheep, assorted vegetables, and watermelon.

The Wildest
Barbecue
The 1898 Stock Show (January 27, 1898) In a bid to become the permanent home for the Stock Show, Denver threw a barbecue (and sold 5,000 advanced tickets)—30,000 showed up. A food riot ensued with men fighting, women and children getting trampled, and the chef weeping at the devastation. Allegedly, Colorado’s governor and Denver’s mayor threw apples to keep people at bay.

Lamb Day in
Fort Collins
September 28, 1909 In what had to be the biggest commercial ever for Fort Collins’ growing lamb industry, the city elders held a free lamb barbecue for 10,000. This “Lamb Day” was so successful that it became an annual tradition. On the menu: hundreds of pounds of lamb, 3,000 loaves of bread, and wagons loaded with cantaloupes, watermelons, and barrels of cider.

Daddy Bruce Gave it Away
November 1964 Denver’s patron saint of barbecue began his decades-long tradition of feeding the needy on Thanksgiving Day. At its peak during the 1980s, an estimated 100,000 people showed up for the free feed. On the menu: anything that Daddy Bruce had…along with a smile.

Depending on where you get your barbecue on, you’ll find different traditions. Here, a field guide to the country’s major regional styles—all of which you can find at local Denver joints.