Look at Tim Tebow. Look at all of his 6-foot-3-inch, 245-pound All-American frame, his cropped hair tousled just so, his Roman nose, his eyes. Yes, those eyes, the ones that so famously sit atop the eye black emblazoned with scripture. Look at Tim Tebow, arguably the best college football player of all time, the man who now wears number 15 for the Broncos (which just happens to be the fastest-selling rookie NFL jersey ever), and ask yourself this: What does this guy know that we don’t?

Because, you see, if you are to believe most anyone who has ever coached, scouted, or played professional football…Tim Tebow’s career is over. His spiral is too wobbly, his release point too skewed, his delivery too slow. He’s too much a product, the critics say, of Urban Meyer’s University of Florida spread offense to be anything more than the world’s most famous clipboard holder. What you can get away with against the University of South Carolina, they argue, will get you murdered by the Baltimore Ravens. That jump-pass thing Tebow used in Gainesville? That’s an excellent way to get your spleen shot out your left nostril in the National Football League. Tebow’s NFL obituary, it appears, has already been written. 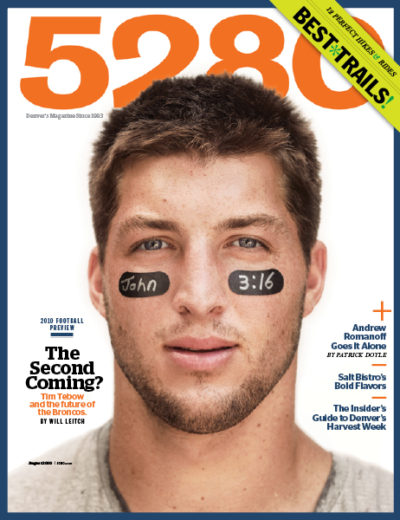 At least, that’s the conventional wisdom. The verdict on Tebow had been processed and reprocessed endlessly even before Tebow left the relative safety of the Swamp. Once he graduated, and then actually worked out for professional scouts, the roars grew louder. This time, even Tebow heard it: The adjustment of his mechanics appeared desperate, eleventh hour. Tebow not only looked human; he looked lost. He looked, from the outside, like a man whose time had passed.

Tebow has heard it all before. “Overall, I have probably faced a bit of criticism in my career, going back to high school,” he told me in June. The demands on Tebow’s time are such that he called me for a six-minute chat squeezed in after a spring practice. “Each year was a different obstacle,” he continues. “But, yeah: The scrutiny is more intense, much more broad-based, than in the past.”

Tebow surely remembers every slight, imagined or otherwise, better than any of us could, but it’s still difficult to remember a time when he faced even a fraction of the scrutiny he is facing now. He was the Florida high school Player of the Year (twice!). He was named “The Chosen One” by ESPN before he ever played a down in college. He won the Heisman Trophy (as a sophomore!). He won two NCAA national championships. He spent summers doing missionary work in the Philippines. He says he’s a virgin! Tim Tebow has lived a lifetime in his 23 years. His biography has already been written.

Except there’s a twist. By the time the NFL draft rolled around this year, it had become the Tebow Tale, and the story was morphing from a feel-good, made-for-Hollywood script into a tragedy. Would he be a fourth-round pick? A tight end? An H-back? Would the Chosen One be humiliated for the first time in his life?

Enter Broncos head coach Josh McDaniels, who never met a windmill he couldn’t, or wouldn’t, tilt at—and then knock over. McDaniels took this “project” with the Broncos’ second pick, 25th overall. And just like that, arguably the biggest story in all of pro sports ended up on our Mile High doorsteps.

Of course it was McDaniels. The NFL is a league of coaches terrified of losing their jobs, afraid of angry owners, screaming fans, and the media calling for the hatchet every time a fourth-down conversion attempt fails. We do not yet know if McDaniels will be a successful NFL head coach, but we do know he is not one of those types of coaches. He is his own man, for better or (so far) for worse. The man might drive you crazy. The man might have no idea what he’s doing. But he is doing it his way. McDaniels, the 34-year-old coaching prodigy who has that same preternatural confidence as his new protégé, has a plan.

If McDaniels and Tebow can execute the plan—which has Tebow learning more traditional throwing mechanics, in addition to learning McDaniels’ notoriously complicated offense—then the two will be hailed as geniuses, men who altered the history of both the Broncos franchise and, perhaps, the NFL, by proving that a nonprototypical quarterback can win on Sunday. Even in the conservative NFL, Tebow’s success could open up the floodgates to other teams looking at draft prospects who run the spread in college, and who, even today, wouldn’t have a prayer of playing in the NFL. If they don’t succeed, they will likely become two more names on the list of the league’s disposable heroes. And the problem, right now, is that Tebow is being set up to fail. He’s already one of the biggest storylines of the upcoming NFL season. He’s in the middle of a juicy quarterback controversy, no matter what his coach says. He’s been dubbed the Mile High Messiah, for crying out loud. Lesser expectations have overwhelmed quarterbacks who could throw the ball a heck of a lot quicker and straighter than Tebow.

Tim Tebow isn’t just carrying the weight of his own legend, though; he’s also carrying the weight of an entire franchise, and an entire city. It is more pressure than any athlete should have to bear, let alone one facing legitimate questions about his ability to play at the highest level. Yet his facial expression never changes. He looks like the exact same hero, the exact same winner, he was at Florida. What are we missing here? What is he missing here?

And so, back to that question: What does this guy know that we don’t? Having been thrown into this impossible situation, having turned everything that has made him him upside down and inside out, he looks…peaceful. Secure. Happy. There he is, already a fixture of the community, tossing passes at Invesco Field at Mile High with kids as part of the Broncos Bunch Kids Club, looking, dare we say, Elway-esque? There he is, signing autographs, handling rude questions with aplomb, taking the field like everything he’s done in his life was nothing more than preparation to become quarterback for the Broncos. This looks like where he was meant to be all along.

“Football is just a platform for me,” he says, alluding to his very public faith. “The games are a bonus. But I also recognize that to keep that platform, I have to perform. I think Denver fans will see how willing I am to work hard to make sure I keep it.” He pauses. “I think I can make that work.”

And there it is, plainly stated, appropriately humble and yet supremely confident. What, or where, does this come from? Does it come from the fact that he has always been told he was a golden boy—the Golden Boy—and he can’t understand a universe in which he isn’t the best? Or does it come from within, from his God, from an inner confidence that only he understands?

An American icon, in the prime of his life, conqueror of all that he has ever surveyed, is now the Christian being thrown into the lion’s den. He has been handed the future of the Broncos. It’s all on his shoulders. It’s a big moment in Denver. Does Tim Tebow look nervous to you? He doesn’t look nervous to me.