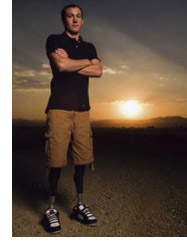 You’ve likely heard the story of Nikko Landeros and Tyler Carron. The two star student athletes from the Fort Collins area pulled to the side of Larimer County Road 17 in January 2007 to help a friend change a tire. Another student’s car hit them and pinned them to the car, cutting off both men’s legs. They’ve since epitomized the act of overcoming adversity, playing sled hockey and serving as inspirational role models. But 21-year-old Carron (pictured) pushed himself even further this weekend, participating in the Warrior Classic bodybuilding competition, flexing all the muscles he has while perched on two shiny prosthetic legs.

“I don’t have legs, but whatever,” Carron tells The Denver Post. “I do the same things I did. I’m [even] still confident getting ladies.” Standing on a stage flexing his muscles and baring nearly all marks more incredible progress along the recovery road for Carron, who says he didn’t think he’d ever wear shorts again after losing his legs. He met weightlifter Michael Alexander in April, and the two began an intensive workout regimen that has Carron looking incredibly cut (photo slideshow available here via The Denver Post). Carron took fifth place—out of five competitors—this weekend, deadpanning that some of the points are awarded for leg muscles. Nevertheless, he was given the “Heart of a Warrior” award for overcoming so many difficult challenges.