The Centennial/Once upon a time in Denver, there were two brothers, Patrick and Nathan Meese, who made fun, melodic power pop. Their band, Meese, signed a deal with a major record label, toured with popular bands, played big venues, and finally put out its major-label debut. It was a rock ’n’ roll dream—until it wasn’t. Meese’s 2009 album Broadcast turned out to be the band’s last act; the brothers felt like they rushed to put out the album, and once it had been released, they knew the band had run its course. The Centennial, the brothers’ latest project—Patrick’s wife, Tiffany, joins in on vocals—is a sonic counterpoint to Meese’s head-bobbing pop. Mellow, atmospheric, and hauntingly beautiful, the band’s EP, Second Spring, weaves Patrick and Tiffany’s choral melodies with keyboards and reverb-laden guitar to create a dreamy soundscape. “I had felt stagnant for a while,” Patrick said over drinks at the Hornet on South Broadway one recent evening. “I had a vision with these songs. I wanted to do something different, something full of space. Sweet. Gentle. It had been a crazy few years for us, but this has been like a rebirth.”—Geoff Van Dyke

Listen if you like: Ethereal, layered dream pop
On the Web: thecentennial.net; meesemusic.com
Track: “1988” 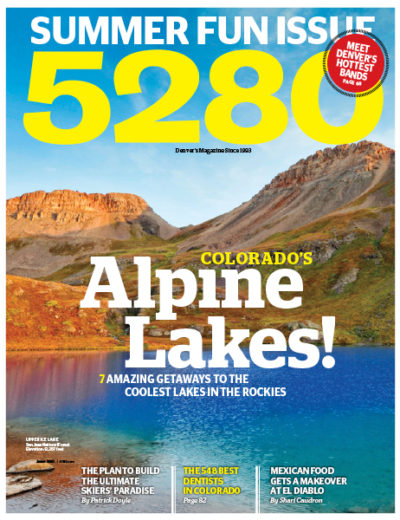 Nathaniel Rateliff/Though he arrived in Denver about a decade ago, Nathaniel Rateliff seems like he’s been here forever. The 32-year-old Missouri native used his bands Born in the Flood and The Wheel to become one of the Mile High City’s workhorse singer-songwriters. His 2010 solo album, In Memory of Loss, a collection of sweet and soulful dirges, is finally getting Rateliff’s name out beyond the Front Range. It debuted in May to widespread acclaim and garnered him extensive “one to watch” coverage from publications in the United States and Europe. He’ll be returning to Denver this month to play two plum opening gigs for Mumford & Sons with his new backing band, Fairchildren (whose drummer is the Centennial’s Patrick Meese, see previous page). Whether he’s performing in front of a few people or the Fillmore’s sellout crowds, Rateliff is always looking for a distinct feeling. “I know I’ll have a great show when I’m walking up to the stage with slight heaviness, slight melancholy, and slight joy that creates this environment to be impassioned and really involved with what I’m doing,” he says. “It encourages everyone onstage to be involved with me, and that emotion between us spreads throughout the audience.” —Luc Hatlestad

Listen if you like: Scraggly crooners harmonizing about happiness and pain.
On the Web: nathanielrateliff.com
Track: “Once In a Great While”

Danielle Ate The Sandwich/ “I wanted to avoid the horror of being another female folk-singer-songwriter with a boring first and last name,” Danielle Anderson says in her quintessentially biting yet understated manner. “I didn’t think my name had the ring I wanted. But I do like my first name. And I like the word ‘sandwich.’?” And, so, Danielle Ate the Sandwich was born. The 25-year-old honed her act at open mic nights in Fort Collins, but it was the Internet—specifically YouTube—that brought her unique blend of gorgeous, folksy melodies and lighthearted humor to a larger audience. On Anderson’s latest album, Two Bedroom Apartment, she has a full backing band, a departure from the stripped-down sound of her voice and ukulele, an instrument that makes her music immediately recognizable. So will Danielle Ate the Sandwich ever play electric, à la Newport-era Bob Dylan? “I want to get an electric guitar and distortion pedals, but I don’t know if I’ll ever go totally electric,” she says. “Even if I do, it’s not like I’ll be screaming—you’ll still be able to understand my lyrics.”—GVD

Listen if you like: Alluring and bold indie-girl folk-pop
On the Web: danielleatethesandwich.net
Track: “Where the Good Ones Go”

Tennis/ When Patrick Riley and Alaina Moore graduated from University of Colorado Denver in 2008, they didn’t get jobs. Instead, the Denver natives sold everything they owned, bought a 30-foot sailboat, and headed for open waters. In January, the now-married “band,” Tennis, released Cape Dory, a tribute to their eight-month Atlantic journey. Recorded in a LoDo studio, the LP’s fuzzed-out riffs, girl-group harmonies, and lo-fi vibe—Tennis’ throwback sound grew out of daily listening sessions on the boat to tunes by the Shirelles and Paul Simon—caught enough blog buzz to land them a deal with the indie label Fat Possum Records. “Some people get annoyed when we say, ‘We didn’t even mean to be a band, and look at how well it’s going!’ But it really was unintentional,” Moore says. The duo will hit Lollapalooza in August, and their future touring and recording plans are still being sorted out. And what about their skiff, still docked in North Carolina? “We can’t even motivate ourselves to relocate to the same state as our boat,” Moore says. “The more we leave Denver, the more we miss being here.”—Nicole Frehsée

Listen if you like: Indie rockers who fuse hazy riffs with mellow harmonies
On the Web: myspace.com/tennisinc
Track: “Take Me Somewhere”

George Inai/ The latest incarnation of George Inai’s career is something even the creator himself has difficulty explaining. The lushly orchestral, yet quirky songs—there are hints of ragtime jazz, Nat King Cole, and Leonard Cohen, among other influences—comprise the soundtrack to an upcoming (and ongoing) visual-musical Web performance dubbed A Curious Ghost. “It’s becoming more of a multifaceted, multisensory experience,” Inai says. “It’s more visual than simply musical. I’ve been messing around with video, and various art projects have somehow fastened themselves to it.” This follows Inai’s earlier work, somber lullabies that conjur images of moonlit deserts and empty, desolate bars where Tarantino-esque misfits gather to plot their next heist. “My wife says my sound comes from memory and imagination,” says Inai, whose ethnic influences—from his own Japanese heritage and his wife’s Mexican background—have shaped all his work. “Colorado’s Latino culture, the Old West, and its history all evoke some kind of feeling that I somehow identify with.”—LH

Listen if you like: An unpredictable artist who incorporates a bit of everything—from jazz to classic country to hauntingly dark ballads—to create completely original songs
On the Web: georgeinai.com, myspace.com/georgeinai
Track: “Serenade to a Satellite”