Bob and Barb Busch have street cred that most owners and renovators of midcentury modern ranch houses can’t claim: They bought their house when it was the middle of the century—or close to it, at least.

It was 1971 to be exact. Back then, the just-under-2,000-square-foot, rough-sawn-and-batten-exterior house was cutting-edge—fresh from the boards of James Ream, an acclaimed midcentury architect who had a firm in Denver for a brief stint in the 1960s. Of course, there are drawbacks to living in a gorgeous home designed by an acclaimed architect: “From the moment we saw the house, we were awed by it,” Bob says. “So we lived with it as-is for a long time. We were almost intimidated to touch it.” With the exception of the detached garage they built in 1976 (designed by Ream), the couple hadn’t changed a single detail on the home’s interior in 40 years. 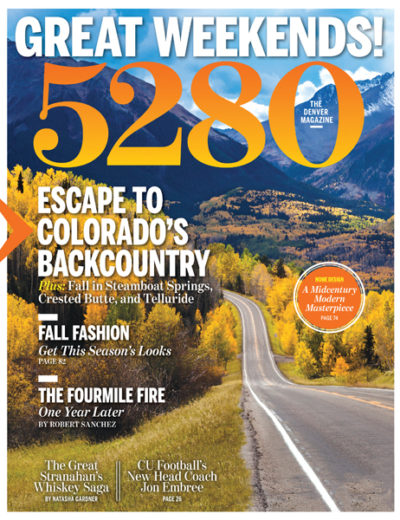 That was, until the fall of 2009 when Barb—finally fed up with the dated birch kitchen cabinets—suggested a small renovation: just clean up the finishes in the kitchen and bathrooms. That’s it.

But as so many renovations go, the proverbial peeling-of-the-onion began. The couple tapped David Grooms of Denver’s Vega Architecture for the project, and one change led to another—then another and another. Sitting in a teak upholstered chair in his great room (a chair he bought 40 years ago, but which looks like it came off the Design Within Reach showroom floor today), Bob proudly recounts the renovation progression: The washer and dryer were removed from the guest bathroom to make way for a washbasin, counter, and mirror. The bathtub was scrapped and a spa-style shower was installed. A storage closet became a utility room that would house the washer/dryer. Bookshelves were built in the great room to create more storage. Redwood panels were removed because they were no longer attractive.

“Houses today can be so isolating. But when I come in here, I’m inspired,” says Grooms, who went to great lengths with his design to honor and preserve Ream’s intentions. “Every moment is designed for. And [because of the liberal use of windows], you’re forced to be part of the bigger world—looking out, not in.”

The house now suits the needs of a 21st-century couple: The old “sitting room” is now a walk-in closet. The bookshelves have a special cabinet for electronics. The master bathroom has a jet-style tub and double sinks. “David [the architect] came in, and he pinpointed the wasted space,” Barb says. “The thing that’s different now is that we really use all the rooms.”

And although the Busches added a deck, they did the entire renovation without adding any square footage to the house. “What you need a house for is to stay warm, eat, and get clean,” Bob says. “Once you provide for that, the only way people can think to make a house better is to make it bigger.

Instead, we say, add aesthetic elements.” James Ream would be proud.