My father and I are flying a giant figure-eight pattern above rocky mountain national park, just west of Longs Peak, at roughly 13,000 feet. Below us, a slight mist hovers above a sliver of water that meanders like a piece of loose yarn dropped on a green floor.

When the airspeed indicator dips below 90 mph, I holler, “Opening!” 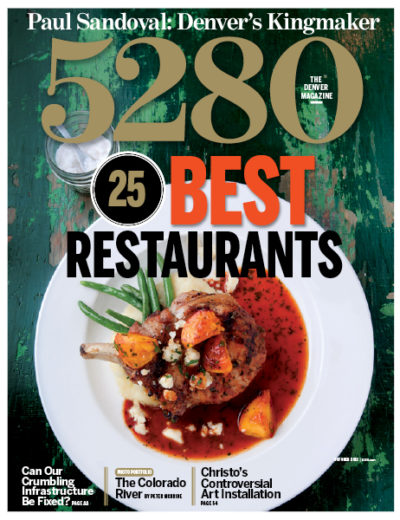 An icy blast rushes through the cockpit, and I twist to the right in my seat, steady my camera, and try to frame the headwaters of our local river, the Colorado.

As I lean my torso out of the window into the prop wash of the single-engine Cessna 180, the aircraft heaves violently then careens sideways like a paper plane in a duster. We start to plummet—sideways. I clutch the open window frame and look at my dad, who’s piloting the small plane.

“Wind shear—we need to get lower,” he crackles in the headset as if talking to himself. Suddenly the fuselage starts to vibrate. It feels like we’re in a soda can that’s about to crumple. Thirty seconds later, my father corrects our crooked flight. I take a deep breath and continue to document the river’s headwaters below us.

“Let’s not do that again,” my father says. “This is our last pass. Get the shots.”

Raised on a cattle ranch in central Colorado, I spent many hours as a child chasing water around our hay fields. Standing knee-deep in muddy ditches, leaning on my shovel, I often tried to read the water’s future path.

I also pondered how long it would take that water—snowmelt originating in the 14,000-foot peaks shrouding the valley—to cross our fields, gurgle down creeks, merge with the mighty Colorado, and eventually make the 1,450-mile march across five states and northern Mexico before the river terminated in the Sea of Cortez.

That innocent query inspired this quest, some 20 years later, to explore every nook of the river’s basin, most of it from a bird’s-eye vantage point in the hope of offering some human perspective and awareness to an impossibly complicated issue.

The snowmelt that crosses our family ranch today has followed a path to and down the Colorado River for six million years, creating one of the largest desert estuaries in North America. But roughly 100 years ago, we started figuring out the power of irrigation and diversions, and in the effort to green the desert, we created a network of pipelines and canals that is nothing less than an engineering marvel. We allocated millions of acre-feet of water throughout seven Western states and pumped the river through tunnels, up hills, and across miles of never-before-irrigated lands to fill pools, water lawns, and produce crops.

The Colorado River, although not the longest or largest river in the United States, is one of the most loved and most litigated rivers in the world. No matter where you live in the United States, you are in contact with Colorado River water. During winter months, the river’s water grows much of the lettuce and carrot crop for the country. Life in Denver and Colorado’s Eastern Slope depends on the river via water siphoned through a host of transbasin diversion projects (dozens and counting). In total, the economies and lifestyles of 30 million people rely on this waterway.

But when a western community moans for more water to fill growing and developing thirsts, the Colorado River, somewhere, groans from another dehydrating straw. Today the river’s delta in Mexico is alarming proof of that demand. Engineering expertise combined with climate change and a 10-year drought has run the river dry 100 miles short of its historically famed wild estuary. In fact, not a single drop of the Colorado River, including the record runoff of this summer, has reached the sea since 1998. Its estuary, which is millions of years old, is now a desert shadow of itself.

Who is to blame? Some argue the “law” of the river, called the Colorado River Compact, enabled an overallocation by miscalculating the Colorado’s flow. It did. But, frankly, all of us ask too much of the basin. We all need water, but the West and Colorado need flowing rivers—not just for our economies, which depend on them, and our native habitat. But we also need them for our unique identity and, perhaps, even for our soul.