Behind every successful sports franchise is a legion of faithful fans that fork over good money to see games and buy jerseys. The Denver Nuggets are no different. Meet the “super fans.”

Occupation: President of a parking service and consulting business.

Super Fan Cred: His Nuggets fandom began after winning a contest to attend a Nuggets road game as a kid. Kloberdanz had a “Birdman” wedding cake (pictured above) He even talked his wife into wearing a Nuggets garter.

What is the effect of losing a Nuggets season? “The effect will be missing 82 games over a six-month period. That’s quite a bit of time. It is a huge void.”

How will you fill the void? “I have already been on the phone with my cable provider. I want to know if they’re going to play any of the Euroleague or Chinese league games.”

What will you miss most about watching the Nuggets? “I will miss the butterflies in my stomach before the games and the intensity during the games. It’s about having something to root for.”

What are your plans for what would have been opening night? “It will probably include binge drinking and sulking, as bad as that sounds. Right now the whole thing is a little surreal. …It won’t really hit until game time.”

Will the lockout change your view of the Nuggets and the NBA? “This will leave a sour taste in my mouth. …I think both sides are being selfish. They get paid millions of dollars to play, and I would do it for free. But it’s not my money.” 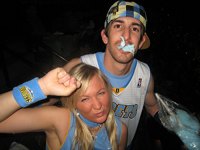 Super Fan Cred: Max sported a Chris “Birdman” Anderson costume for Halloween knowing that he may still get tricked out of an NBA season. That’s love.

What is the effect of losing a Nuggets season? “We only have cable TV in winter so I can watch the Nuggets. If they don’t play, we definitely won’t be getting cable, which is a bummer”

How will you fill the void? “I don’t think there is really anything that can replace it. People say they are going to be broadcasting all the international games where the NBA players are going, but I’m skeptical that it can replace the product and quality of the NBA. …Maybe I will just ski more.”

What will you miss most about watching the Nuggets? “I get to watch most of the games between TVs at work and at home. It’s just a drag not getting to watch them. It’s just weird. It’s empty.”

What are your plans for what would have been opening night? “I haven’t even thought about what I would do. I was so optimistic that they would reach a labor agreement. This happened with football and they pulled it out. I was really hoping that would happen with the NBA, but it’s looking worse and worse.”

Will the lockout change your view of the Nuggets, the NBA as a whole? “I have heard people talking about boycotting the NBA just to show them fans won’t tolerate it. But, that’s not me. I will return to the NBA as a brand and the Nuggets when they come back. It’s disappointing, but it’s part of business.”

Super Fan Cred: The native of Julesburg, Colorado became a Nuggets fan during the 1984-1985 season when Denver went to the Western Conference Finals against the Lakers. Matt has since passed his Nuggets fandom down the bloodline to his son, Owen (pictured). He likens his love for the Nuggets to a small dose of insanity—pouring his time, money, and emotions into every season, honestly expecting different results.

What is the effect of losing a Nuggets season? “The game time doesn’t even account for time spent otherwise checking out what’s in print, on blogs, or on the radio. The funny thing about being a Nuggets fan is it is kind of like being a Cubs fan—and maybe it’s worse.”

How will you fill the void of a Nuggets season? “I will spend all the extra time with my family, which is good, but one of the things we like to do together is watch basketball games. …Luckily, I’m a big college basketball fan.”

What will you miss most about watching the Nuggets? “This is probably the year they would have caught lightning in a bottle, and now the season is going to be washed away because they can’t figure out how to divide billions of dollars.”

What are your plans for what would have been opening night? “I’d like to say I’ll cry in my beer, but it’s hard when our president is telling us that our economy is on the verge of collapse and people are out of jobs.”

Will the lockout change your view of the Nuggets, the NBA as a whole? “It will be disappointing. The game itself will be damaged. …I’ll come back.”

Day One: The Player