Chef-owner Justin Cucci first made his mark on Denver’s dining scene with the perennially cool Root Down. And now, all it takes is a spin through Linger to see that Cucci has—once again—created the hottest restaurant of the year. It all works: Linger sits like a beacon in the booming LoHi neighborhood. The vast windows and rooftop patio (soon to be festooned with a food truck—yes, really) put the city skyline and the mountains on display. And what was the Olinger Mortuary’s parking garage and offices is now outfitted with retro-cool wallpapers, swirling booths, and multiple levels that showcase the beautiful, cocktail-sipping crowd. 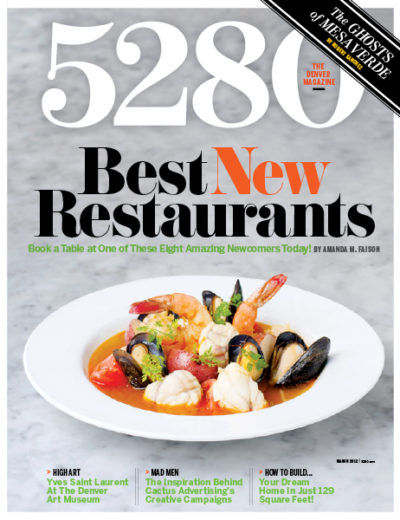 Ever one to push diners, Cucci opened Linger without a single entrée on the menu. Instead, there are two pages of globally inspired small plates where the familiar (sliders, pad thai, ceviche) mash up against the less so (goi Bo, kofte, bhel puri, dosa). All are passed through a global sieve to excellent result. Rely on the army of servers to explain, recommend, and create a thrilling meal. 2030 W. 30th Ave., 303-993-3120, lingerdenver.com

In 2010, on the front end of Denver’s food-truck trend, Kevin Morrison launched Pinche Tacos, a roving seven-by-14-foot trailer serving made-to-order street tacos. Within a month, the truck was attracting long lines of diners waiting for staples such as the queso a la plancha (griddled Cotija cheese with tomatillo salsa and avocado) and the lengua (crispy beef tongue) served on palm-size corn tortillas.

With the fan base firmly in place, Morrison opened Pinche Taqueria, a brick-and-mortar eatery on the edge of Capitol Hill this past October, and boy, did he get it right. The restaurant smartly builds upon the eats that made Pinche so sought after with a bigger menu, brunch, and the all-important liquor license. This is street food with a decidedly foodie point of view—carefully sourced ingredients, locally made tortillas, and ingenuity. In the town that invented Chipotle and has authentic Mexican food in spades (see Federal Boulevard), Pinche Taqueria is a reminder of what Mexican street food can and should be. 1514 York St., 720-475-1337, pinchetacos.com

Tucked below the glitz of Larimer Square, you can taste the future of Mile High dining inside TAG Raw Bar’s small, urban space. Perch on one of the tangerine-colored bar stools, start with some sparkling rosé sake, and order the Fire ’n’ Ice (jewel-like hiramasa and tuna oshizushi) and the tender kangaroo tartar (warmed to room temperature with a blowtorch). Or, settle in for a several-hour, seven- or nine-course tasting menu. Either way, come prepared for food you won’t find anywhere else in town. Chef-owner Troy Guard and his team turn out wildly creative plates that riff on a variety of Asian and Pacific influences to create something wholly new.

At TAG Restaurant, one floor up and a couple of doors down, Guard has distinguished himself as a wizard at juxtaposing textures and flavors, while not falling prey to the trappings of clichéd “fusion” cuisine. With Raw’s casual but hip atmosphere, and dishes such as raw fish tacos with corn nuts and new-style oysters and hearts of palm, Guard may have created a spot that even outshines the original TAG. Expect the newly expanded space (34 seats added to the original 32) to only add to the buzzy vibe. 1423 Larimer St., #010, 303-996-2685, tagrawbar.com

At just six months old, Charcoal is already an anchor in the Golden Triangle neighborhood. Not only did the restaurant replace a barely mediocre deli, but it also brought upscale, European-style eats to an area more accustomed to the casual vibes of Cuba Cuba and Rooster & Moon Coffee Pub. It does this elegantly with a modern space draped in sultry fabrics, dark wood, and a glass-enclosed wine case. Chef Jens Patrik Landberg’s cooking stands up to the gloss: Though we first tasted his homey European-style cuisine at the late Satchel’s Market, here he lets loose and shines. The menu is reminiscent of a steak house (and servers eagerly explain Charcoal’s use of bincho, a high-temperature, smokeless charcoal), but the food and presentation is much more nuanced than a slab of sizzling beef on a white plate. Landberg wraps striped bass in speck and serves it with an inventive sweet potato tortilla Española. He gets a perfect sear on the New York strip, adds Stilton crème, and tops it with a crispy sourdough onion ring. He bathes mussels in a spicy Hatch green chile–white wine broth and serves grilled pork loin with a flaky Roquefort biscuit. It’s in these small, surprising elements that Landberg’s passion for his craft truly shows.

When Frasca Food and Wine’s Bobby Stuckey and Lachlan Mackinnon-Patterson open a pizza joint, you can be sure the bar will be set almost unfairly high. But no one places higher expectations on Stuckey and Mackinnon-Patterson than they do: Frasca is a classic because of the attention to detail, from the kitchen to the dining room to the maître d’. Pizzeria Locale is no different. The 10,000-pound oven, constructed from Mount Vesuvius’ volcanic rock, was built by the famed Stefano Ferrara family in Italy and imported to Boulder. At 1,000 degrees, it takes less than two minutes to turn out pies with charred crusts topped with simple collections of pure ingredients. The classic margherita—crushed San Marzano tomatoes, mozzarella di bufala, fresh basil—is sublime; the more modern mais (corn, crème fraîche, prosciutto cotto, and mozzarella di bufala) equally so. But it takes more than an oven to make a good pizza. Chef Jordan Wallace spent months learning the craft from pizzaiolos in Naples, and many more months perfecting a dough recipe that would perform at altitude. Proof of a job well done comes in the form of the patrons who fill the small space nearly every minute the doors are open. Bonus: Stop by for Aperitivo Hour (4:30 to 5:30 p.m. daily) for prices on food and drink that range from 50 cents to $8. 1730 Pearl St., Boulder, 303-442-3003, pizzerialocale.com

If you lived in Denver in 2003, you likely remember—perhaps even pine for—Brasserie Rouge. Regardless of whether you dined there, the good news is that in many ways, Le Grand Bistro & Oyster Bar is Rouge reincarnated. Robert Thompson (who owned the late brasserie with his now ex-wife, Leigh Jones) has brought everyday, affordable French back downtown. And by cooking French with modern sensibilities, executive chef Sergio Romero ensures that Le Grand isn’t stuffy or trite. On paper, the menu looks traditional—cassoulet, French onion soup, trout almondine—but on the plate Romero’s dishes are light, fresh, and remarkable. You’ll find this in the ratatouille tart with mandoline-thin vegetables; the steak frites starring Colorado’s Best Beef; or the exquisitely seasoned salade niçoise topped with a hunk of seared tuna. Equally exciting is Le Grand itself, which has taken up residence in one of Denver’s oldest (and largest) restaurant spaces. The 125-year-old dining room with original mosaic tile and a sparkling chandelier simply shines, making any meal—brunch, lunch, or dinner—feel like an occasion. 1512 Curtis St., 303-534-1155, legranddenver.com

If someone had said one year ago that Scandinavian-influenced restaurants would be one of the biggest trends in Denver dining at the start of 2012, you would have told him to shut up and enjoy another bite of his lutefisk. But here we are, with not one, but two spots on this list that mine the rich culinary roots of northern Europe. At Trillium (named for the flower), chef-owner Ryan Leinonen blends American inspiration with Scandinavian tradition. He coaxes beauty out of stark, hearty ingredients such as root vegetables, cold-water fish, and rye bread to turn out soulful combinations. The crisp winter salad with shaved turnip, pear, rutabaga, and carrot is refreshing and simple, especially against the savory comfort of the apple, rosemary, and cheese curd bread pudding appetizer. Dishes like these are conversation starters, and they soften the exacting, Ikea-esque edges of the downtown space. Try the steelhead trout raaka appetizer—a briny, clean-tasting tartare topped with whitefish roe—and follow it with the lusty open ravioli of grilled blue prawns, the richness of which is cut by seared kale. 2134 Larimer St., 303-379-9759, trilliumdenver.com

Every neighborhood needs a corner spot where you can grab a solid burger and a good salad—and all the better if that place is appealing for date night or an evening out with the kids. Situated on the corner of Pennsylvania Street and Alameda Avenue, CafeBar reads its West Washington Park residents perfectly, and, based on the crowded dining room and bar, it’s found its niche. Come here for the juicy bison burger stacked on soft brioche and dressed up with grilled onions and heavenly molasses-glazed bacon. If you’re in the mood for something a little more refined, try the sliced duck breast or lamb T-bones with smoked tomatoes and roasted leeks. Either way, chef Eric Rivera’s nuanced menu of comfort classics fits the occasion. The space—upscale without being uppity, sleek without being rigid—feels just right, and come patio season, the tucked-away courtyard will be one of the best in the city. At just seven months old, CafeBar is already so knit into the fabric of the neighborhood, it makes you wonder what residents did before the doors opened. 295 S. Pennsylvania St., 303-362-0227, cafebarcolorado.com