Jake Weidmann doesn’t have what most would call a “modern” career. The 27-year-old is an illustrator, painter, sculptor…and calligrapher. It’s his striking work with a pen that nabbed him the title of Master Penman—the youngest ever—and the chance to write the preamble to Colorado’s Constitution in handwritten ink for the first time.

Calligraphy is a medium Weidmann didn’t intend to pursue. At Biola University, professors were startled to be grading tests adorned with detailed, artistic handwriting—and were even more surprised to discover bodybuilder Weidmann was the man behind the doodles. As the self-taught artist’s reputation spread across campus, he began picking up official commissions, like penning wedding invitations. Feeling the need for more formal training, Weidmann started browsing calligraphy websites and came across a clip of one of the world’s most skilled ornamental penmen, John DeCollibus, at work. “I fell in love,” Weidmann says. “It was like watching ballet on paper.” And that, as they say, was that. 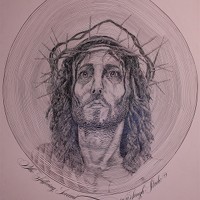 As he delved further into calligraphy, Weidmann began to notice the lack of suitable tools available—pens simply aren’t made like they used to be. So he began crafting his own, and his work flourished.

Single Stroke (pictured above, in part, and in full size to the right) is a prime example of Weidmann’s characteristic attention to detail: It’s an image of Jesus Christ—created with one continuous line. An homage to a metal Christ engraving made in 1884, Weidmann used a homemade pen and Japanese stick ink to create a portrait drawn from a single line that wraps around itself 175 times.

The painstaking process took seven days as Weidmann carefully crafted balanced line thicknesses and space ratios. Spirituality and its accompanying dichotomies (life and death, darkness and light, old and new) are a consistent theme in Weidmann’s work (view a slideshow of his pieces here)—appropriate for a young artist who uses ancient methods in modern-day expressions.