5280.com Exclusive: See a slideshow of images from the cottillion here.

It started as many things do when you have kids, which is to say as an idea—emailed—from a savvy parent of one of our children’s friends: Would your son be interested in attending Cotillion training with my son?

The email contained a link to “Jon D. Williams Cotillions.” A few clicks and there appeared photos of children all about the same age as my 10-year-old son, True; boys and girls dancing, holding hands, drinking punch together. The boys wore jackets and ties. The girls dressed, as my grandmother used to say, to the nines, complete with white gloves. On the website there was this snippet: “In a world where kindness, courtesy and respect are often overlooked, JDW Cotillions is recognized as an authority in educating young people in the art of social dance and social skills training.”

My wife and I thought this sounded like a stellar idea and to my astonishment so did True. His first question: “Do I get to wear a tux?” No. “A suit?” Yes. “Awesome.” You sure you want to do this? “Yes, I’m sure,” True said in a tone that conveyed Why wouldn’t I be sure? Our younger son, Jack, was thrilled that he was too young to “have to do this.”

The French invented cotillion in the 18th century. Traditionally, it was a group dance in which several couples dance in choreographed unison, rhythmically and repeatedly changing partners. The changing partners bit was key. The French’s, being the romantics they are, ulterior motive was for the dance to allow the participants to meet, mingle, and flirt in a most dignified way. “Cotillon” is French for “petticoat,” and “cotillion” derives from the flashing of 18th century petticoats when the early dancers would spin about, and generally bust their post-Enlightenment moves on the dance floor.

As far as the JDW Cotillions go, “cotillion is the foundation for learning important social skills through dance.” The program required a weekly hour and a half commitment, for about six weeks. Our only reservation was the time commitment. Between homework and all the rest, and, you know, trying to make sure the boys have time to simply do nothing, or at least something not scheduled, was challenging enough. I wondered aloud if his dance card was already too full and did he really need cotillion in his life. He seemed eager, and so we decided to pay the $150. True signed up with two of his pals for the fourth and fifth grader program.

Indeed, there is a dress code: Girls must wear party dresses, flats or low heels, and short white gloves. And while the boys do not wear tuxedos, much to our son’s disappointment, they must wear suits or sport coats and ties, and black or brown dress shoes. And so we went suit shopping. True picked out a gray number with white pinstripes, two dress shirts, and a two ties. (No clip-on’s. We discussed that if a young man were ready for a suit, he was ready for a young man’s tie.) A few days later, his mother and I took him to the University of Denver’s Cable Center for the kick-off event.

Earlier that day, our two boys had been rolling around in our yard, wrestling, and whacking each other with cardboard boxes. Now, it was nothing short of stunning to see True among some 80 boys and girls filing into the main Cable Center rotunda dressed as they were. It seemed that the children themselves were amazed, and frankly, enjoyed their unusual appearance. And JDW was wise to specify that girls wear flats or low heels as most of them already towered over the boys.

Upon entering the doors, the Cotillion program begins immediately, with the owner, Jon D. Williams III, standing in the center of the grand room, holding a microphone, and welcoming the children. William’s mother and father were classically trained ballroom dancers who met through a connection to Fred Astaire, with whom they worked for many years. They started JDW Cotillions, which is now operated nationwide by their son, Jon D. Williams III. An alumnus of the University of Denver, Williams himself is an accomplished dancer and a former tennis star. It makes sense then that he exudes grace. He seized control of the 80 some kids with effortless aplomb. “How you act,” he said in a soothing, matter-of-fact tone to the kids, “is not only a reflection of your character. It is also a demonstration of your education.”

In no time, like a lion tamer working magic on kittens, Williams taught the children to introduce themselves and use proper posture when seated—“gentlemen do not take a seat until the ladies sit.” And very shortly into that first session, the young gentleman were asking the young ladies to dance and escorting them to the dance floors. Of course, the roles were also reversed. Williams explained to the young ladies that they, too, should introduce themselves and take the lead. Ladies, he said, you will be competing for the same jobs and opportunities as the men, and giving a firm handshake and leading the proverbial dance is important.

Then it was the Fox Trot, the Jitterbug, and the Waltz. It’s something to behold, watching your 10-year-old son ask someone’s 10-year-old daughter if she would like to dance, taking her hand in his. It is one of those moments where seconds linger like seasons and you feel as if you are watching your child grow, and more to the point, mature.

During the six-week program, the children learned things like “Introduction to Social Skills,” “Meeting New Friends,” “First Impressions,” and “Respect & Consideration.” That last hoorah was a dance at the Brown Palace Hotel. (True insisted, futilely, that he should wear a tux to a place like the Brown Palace.) This final event is the only one where the parents are invited to attend (as opposed to watching from afar) and are expected to participate. During the evening there is a time when daughters dance with fathers and sons with their mothers. At the Brown Palace affair, I noticed U.S. Senator Michael Bennet was on-hand. We chatted. It turned out that two of his three daughters, Caroline and Halina, were in the class and that one of the girls and True were sharing a waltz. They were easy to spot because, flats or not, his lovely daughter towered over my trembling son.

I noticed the senator stealing glances at his smart phone with what appeared, to me at least, to be an especially pensive look on his face. Much later, Senator Bennet would tell me that it had merely been typical business, nothing out of the norm, and he’d say that it was not until later that night, watching CNN, that he, just like the rest of us, would learn what had happened: Right about the time of the Cotillion, a world away, a team of U.S. Navy Seals had killed Osama Bin Laden. Everywhere in the media, in the hours and days that followed, were reports of war, terrorism, crisis. There were the usual images of violence, civil unrest, and the incredibly provocative scenes of American youth gathered outside the White House, celebrating The Kill. It occurred to me that this has been the only world our 10-year-old, the only world that all fifth graders have ever known—this post 9-11 world. 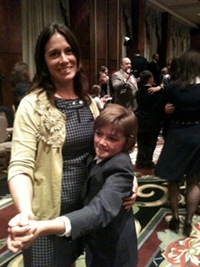 Indeed, our children’s schedules, all of our schedules really, are hectic, and in what is a relentlessly chaotic and often harsh—ill mannered to say the least—world. As our children get older, as they mature, all of this will only become more a part of their reality. Later that evening, seeing the Bin Laden news and all of the imagery that went with it, I felt extraordinarily grateful for the cotillion. I was grateful that while the world had been spinning crazily, a group of children had been oblivious to it all, and instead were twirling together peacefully, working on being kind to one another, and enjoying the music, if only for a few hours on a spring evening at the Brown Palace. I was glad that those would be the children’s memories of that night. I was glad that I watched my son, in his gray suit and sharp tie, ask his mother to dance, take her by the hand, and sway together in a waltz.