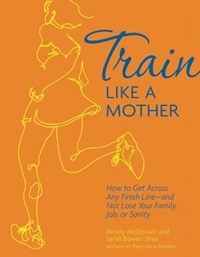 Two years ago, when Denverite Dimity McDowell (above, left) and co-author Sarah Bowen Shea’s book, Run Like a Mother, was published, the two had no idea what they’d begun. On the eve of the release of the duo’s second book, Train Like a Mother: How to Get Across Any Finish Line—and Not Lose Your Family, Job or Sanity (Andrews McMeel Publishing), it’s become clear: From their blog, anothermotherrunner.com, to their Facebook page (which boasts more than 15,000 “likes”), they’ve created a vibrant community of women and mothers who love to run. We recently caught up with McDowell, who’ll be reading and signing copies of Train Like a Mother at the Tattered Cover on Colfax Avenue on March 22, to talk about the sisterhood of mother runners, mixing exercise with busy lives, and her next big race.

5280: You and your co-writer Sarah have developed a quite the following. Dare I say you have groupies?

DM: What happens so often is that you become a mom and everything about you falls away—you’re worried about your kids or keeping your house clean—and all of a sudden you stop taking care of yourself. Even now, I still feel like the freak on the block when I get up at 5 a.m. to go for a run. It’s not the norm, but this community validates doing that kind of thing for women. And this community’s taken shape for all these women and now people are posting their victories on our Facebook page. It’s really cool.

One of the things that struck me about the two books is the humor and the strong sense of voice. So many training books are so dull and utilitarian.

We run for the time on the clock, but we also run to maintain our sanity and for fun and for some time to ourselves. So we set out to write a book that was unlike any other running book. We wanted to do a book that wasn’t intimidating—running still seems intimidating to a lot of people even though it really isn’t anymore. And we wanted to make it more about getting people interested in running for their lives, not just for one race.

What’s the biggest issue with regard to running that you hear from mothers?

Coming back after having giving birth is a big one: Your body’s different, and that can be frustrating. Sometimes you’re faster because you have to be more focused on your training, but sometimes you’re not. We hear from women with spouses who don’t understand the whole running thing. You know, exercise can make you feel better and make you more confident in yourself. So if you’re out there running and feeling all giddy and then you come home to your husband and kids—that brings things back to earth pretty quickly.

What would be your advice to me—a father who’s run three half marathons but is now out of shape and has put on a few extra pounds. My kids are old enough now and I actually have some time to start running again.

“Don’t think, just go” is sort of my unofficial mantra, but if you’re committing to something like a half marathon, give yourself enough time to get there. Don’t rush it. Running shouldn’t be a source of stress; it should be a source of stress relief. And it’s really important to sit down with your spouse and explain that your training is going to be as minimally invasive as possible, and, aside from one morning each weekend, you’ll work around his or her schedule.

What’s your next big race?

I find that when I just run I get hurt, so I’m looking to do a few triathlons. I really want to do the Harvest Moon Triathlon (1.2-mile swim, 56 mile bike, 13.1 mile run) in Aurora in September. I’ve done two Half-Ironman tris, but it’s been a while. It’s going to take a little dedication to get back into it. I love the swim and the bike—and then I kind of just hang on for the run.