After four years of all-night study sessions, midterm papers, and more cups of coffee than anyone should ever drink, I’m finally about to graduate from the University of Colorado Boulder with a journalism degree. I should be suffering from a bad case of senioritis. But, like my fellow classmates, I’m facing a dismal unemployment rate (especially for recent grads).

As my May 10 commencement nears, I wish that I were starting my first year again—if only it didn’t cost so darn much. Think: $30,000 for a degree—and that’s for in-state tuition (see infographic above). Since I matriculated, per-semester tuition has risen by nearly a thousand dollars, and next year in-state tuition will increase by 5 percent. (The current inflation rate is less than 3 percent.)

I’ve been a solid student who has completed more internships than I can count on one hand—yet, I may be serving your morning coffee next week. If I’m lucky. If not, I’ll join the ranks of the unemployed (the jobless rate among new graduates climbed to 9.1 percent in 2010, the highest level in recent American history).

Even worse, along with our degrees comes a pile of student loans we can’t begin to pay off. According to the Project on Student Debt, the average Colorado student graduates with $22,017 of debt. It’s not that we twenty-somethings expect to be rich straight out of the gate—the eating-ramen-noodles-out-of-a-Frisbee stereotype exists for a reason. But my fellow students and I are becoming a lost generation. If we can’t find work now, what happens in five years? My friends and I hardly even talk about careers these days; we’re just hoping to find a job. 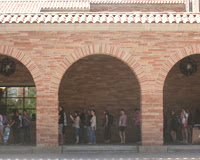 In this anxious climate, it’s surprising—and daunting—that interest rates on federal student loans are set to double in July unless Congress extends low-interest financing. President Obama will speak at CU tonight as part of an effort to convince Congress to pass legislation preventing the rate hike.

We students will be watching closely. Some 4,500 of us, including me, waited several hours in a line that snaked through the CU campus, just for a chance to get a ticket to see the speech. If the president can’t convince Congress to act, interest on loans taken out by nearly eight million students will jump to 6.8 percent. As Obama has said, such an increase would be a “tremendous blow” to American youth, one that would be “cutting our own future off at the knees.” 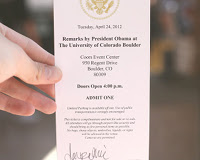 A recent New York Times article discusses why some nations prosper while others lag. It turns out it has little to do with natural resources or geography, but rather with the amount of control citizens have over their own destiny. Education, in part, helps create this control. Overpricing education—and student loan interest rates—could limit America’s prosperity.

I’ll be there tonight to hear what more President Obama has to say. As a soon-to-be graduate with a high GPA and no real job prospects, this will be one of the most important lectures I’ll attend this semester. I hope he can ignite the same excitement around this issue that he did for the idea of change during the 2008 election. Maybe his words will have an impact on student loans; maybe they won’t. I do know his appearance has at least one benefit I can appreciate: It’s free.